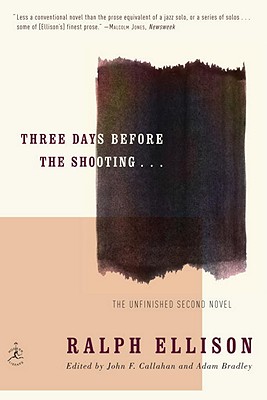 Three Days Before the Shooting . . .

At his death in 1994, Ralph Ellison left behind several thousand pages of his unfinished second novel, which he had spent nearly four decades writing. Five years later, Random House published Juneteenth, drawn from the central narrative of Ellison’s epic work in progress. Three Days Before the Shooting . . . gathers in one volume all the parts of that planned opus, including three major sequences never before published. Set in the frame of a deathbed vigil, the story is a gripping multigenerational saga centered on the assassination of a controversial, race-baiting U.S. senator who’s being tended to by an elderly black jazz musician turned preacher. Presented in their unexpurgated, provisional state, the narrative sequences brim with humor and tension, composed in Ellison’s magical jazz-inspired prose style. Beyond its compelling narratives, Three Days Before the Shooting . . . is perhaps most notable for its extraordinary insight into the creative process of one of this country’s greatest writers, and an essential, fascinating piece of Ralph Ellison’s legacy.

Praise For Three Days Before the Shooting . . .…

“Less a conventional novel than the prose equivalent of a jazz solo, or a series of solos . . . some of [Ellison’s] finest prose.”—Malcolm Jones, Newsweek

“Stirring . . . a deeply complex, even epic, story . . . rendered as majestically as you would expect from Ellison.”—Associated Press

“[This book is] more than a novel. It’s a literary experience.”—Ebony

Ralph Ellison (1913–94) trained as a musician at Tuskegee Institute from 1933 to 1936 before turning to writing. Invisible Man won the National Book Award. Appointed to the Academy of American Arts and Letters in 1964, Ellison taught at several institutions, including New York University, where he was Albert Schweitzer Professor of Humanities.

John F. Callahan is Morgan S. Odell Professor of Humanities at Lewis and Clark College in Portland, Oregon. He is the editor of the Modern Library edition of The Collected Essays of Ralph Ellison and is the literary executor of Ralph Ellison’s estate.

Adam Bradley is an associate professor of English at the University of Colorado at Boulder. He is the author of the critical study Ralph Ellison in Progress.
Loading...
or
Not Currently Available for Direct Purchase