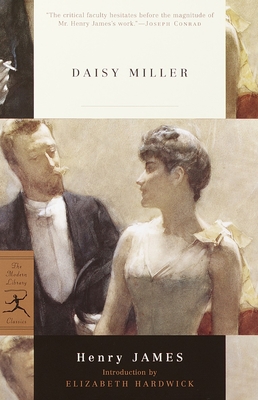 Originally published in The Cornhill Magazine in 1878 and in book form in 1879, Daisy Miller brought Henry James his first widespread commercial and critical success. The young Daisy Miller, an American on holiday with her mother on the shores of Switzerland’s Lac Leman, is one of James’s most vivid and tragic characters. Daisy’s friendship with an American gentleman, Mr. Winterbourne, and her subsequent infatuation with a passionate but impoverished Italian bring to life the great Jamesian themes of Americans abroad, innocence versus experience, and the grip of fate. As Elizabeth Hardwick writes in her Introduction, Daisy Miller “lives on, a figure out of literature who has entered history as a name, a vision.”

“The critical faculty hesitates before the magnitude of Mr. Henry James’s work.”—Joseph Conrad

Elizabeth Hardwick is the author of many books and essays, including Herman Melville (Penguin Lives), Sleepless Nights, and American Fictions, available as a Modern Library paperback. She lives in New York City.
Loading...
or support indie stores by buying on