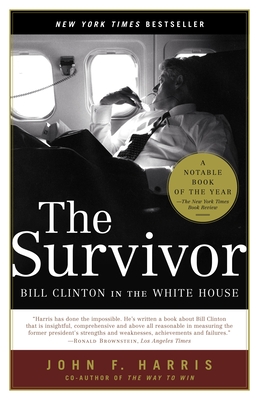 Bill Clinton in the White House

The definitive account of one of the most accomplished, controversial, and polarizing figures in American history

Bill Clinton is the most arresting leader of his generation. He transformed American politics, and his eight years as president spawned arguments that continue to resonate. For all that has been written about this singular personality–including Clinton’s own massive autobiography–there has been no comprehensive, nonpartisan overview of the Clinton presidency.

Few writers are as qualified and equipped to tackle this vast subject as the award-winning veteran Washington Post correspondent John F. Harris, who covered Clinton for six of his eight years in office–as long as any reporter for a major newspaper. In The Survivor, Harris frames the historical debate about President William Jefferson Clinton, by revealing the inner workings of the Clinton White House and providing the first objective analysis of Clinton’s leadership and its consequences.

Harris shows Clinton entering the Oval Office in 1993 primed to make history. But with the Cold War recently concluded and the country coming off a nearly uninterrupted generation of Republican presidents, the new president’s entry into this maelstrom of events was tumultuous. His troubles were exacerbated by the habits, personal contacts, and the management style, he had developed in his years as governor of Arkansas. Clinton’s enthusiasm and temper were legendary, and he and Hillary Rodham Clinton–whose ambitions and ordeals also fill these pages–arrived filled with mistrust about many of the characters who greeted them in the “permanent Washington” that often holds the reins in the nation’s capital.

Showing surprising doggedness and a deep-set desire to govern from the middle, Clinton repeatedly rose to the challenges; eventually winning over (or running over) political adversaries on both sides of the aisle–sometimes facing as much skepticism from fellow Democrats as from his Republican foes. But as Harris shows in his accounts of political debacles such as the attempted overhaul of health care, Clinton’s frustrations in the war against terrorism, and the numerous personal controversies that time and again threatened to consume his presidency, Bill Clinton could never manage to outrun his tendency to favor conciliation over clarity, or his own destructive appetites.

The Survivor is the best kind of history, a book filled with major revelations–the tense dynamic of the Clinton inner circle and Clinton’s professional symbiosis with Al Gore to the imprint of Clinton’s immense personality on domestic and foreign affairs–as well as the minor details that leaven all great political narratives. This long-awaited synthesis of the dominant themes, events, and personalities of the Clinton years will stand as the authoritative and lasting work on the Clinton Presidency.

Praise For The Survivor: Bill Clinton in the White House…

"Vivid and enlightening….John F. Harris has done the impossible. He's written a book about Bill Clinton that is insightful, comprehensive and above all reasonable in measuring the former president's strengths and weaknesses, achievements and failure."
--Ronald Brownstein, The Los Angeles Times

"A responsible, honest, tough, and -- best of all -- considered assessment of Clinton's presidency."
-- The Atlantic

"John Harris' important new book is without doubt a sign that history, with all its plodding seriousness, is catching up to the go-go 90's. That's good news. For too long, since Mr. Clinton began his improbable run, this super-sized American story has been distorted by extremist views….[The Survivor is] a smart reflection on those mercurial years from one of Washington's best reporters. It's scrupulously researched; it's well-written; and, to a surprising degree, it's calm -- not an adjective we usually find in Clintonland."
--Ted Widmer, The New York Observer

"Washington Post reporter John F. Harris, who covered the White House during Clinton's last six years, has made the most ambitious effort thus far: to chronicle the Clinton years in the context of the era's political trends and to connect the successes and failures of his presidency back to his character. It is a scrupulously fair-minded book, with plenty of ammunition for both Clinton's admirers and detractors."
--Jeff Greenfield, Washington Monthly


“John F. Harris is the most lucid writer in American political journalism today. One reads his work and knows that he has it exactly right, like a fine tailor producing well-fitted suits. I love reading Harris for his deep and rewarding insights, especially when he writes about Bill Clinton. In The Survivor, he shows once again that he has the perfect measure of a very contradictory man.”
–David Maraniss, author of First in His Class: A Biography of Bill Clinton

“John Harris has written a fascinating account of the downs and ups of the Clinton presidency. The Survivor is fair-minded, well informed, absorbing in narration, mature in judgment."
–Arthur Schlesinger, Jr.

“John Harris has an unmatched eye for detail, and it’s all here in a way no one else has chronicled the Clinton years. This is the work of a superb reporter who was an eyewitness to an entire presidency (and I should know–I had to compete against him covering the Clinton White House). Of all the correspondents I remember from the blur of our lives together covering President Clinton (the sometimes chaotic West Wing, the dizzying around-the-world travel on Air Force One), John Harris is the one I would have chosen to leave behind the benchmark piece of work on what those eight years meant to the nation.”
–Brian Williams, anchor and managing editor, NBC Nightly News

“John Harris reaches a generally favorable verdict on Bill Clinton, but there is no lack of evidence that could lead to a different conclusion. It’s all here, with fascinating fresh detail. A good book and a good read.”
–Brit Hume, Washington managing editor, Fox News Channel; anchor, Special Report with Brit Hume

“John Harris tells the real story of the West Wing during the Clinton years, with the clear-eyed insight, humor, and verve of one of the nation’s top political reporters. Thankfully, he leaves all political spin at the door.”
–Gwen Ifill, moderator and managing editor, PBS’s Washington Week

John F. Harris is a veteran political reporter for The Washington Post who covered the Clinton presidency from 1995 through its conclusion in 2001. His work during these years earned several prestigious awards, including the White House Correspondents’ Association’s Aldo Beckman Award and the Prize for Distinguished Reporting on the Presidency from the Gerald R. Ford Library. Additionally, Harris is a panelist on PBS-TV’s Washington Week and appears on numerous other television and radio programs.
Loading...
or
Not Currently Available for Direct Purchase