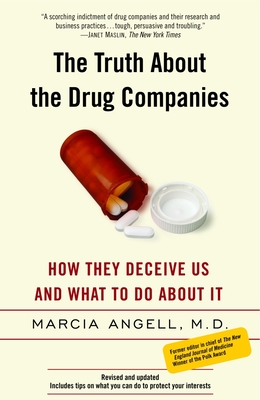 The Truth About the Drug Companies

How They Deceive Us and What to Do About It

During her two decades at The New England Journal of Medicine, Dr. Marcia Angell had a front-row seat on the appalling spectacle of the pharmaceutical industry. She watched drug companies stray from their original mission of discovering and manufacturing useful drugs and instead become vast marketing machines with unprecedented control over their own fortunes. She saw them gain nearly limitless influence over medical research, education, and how doctors do their jobs. She sympathized as the American public, particularly the elderly, struggled and increasingly failed to meet spiraling prescription drug prices. Now, in this bold, hard-hitting new book, Dr. Angell exposes the shocking truth of what the pharmaceutical industry has become–and argues for essential, long-overdue change.

Currently Americans spend a staggering $200 billion each year on prescription drugs. As Dr. Angell powerfully demonstrates, claims that high drug prices are necessary to fund research and development are unfounded: The truth is that drug companies funnel the bulk of their resources into the marketing of products of dubious benefit. Meanwhile, as profits soar, the companies brazenly use their wealth and power to push their agenda through Congress, the FDA, and academic medical centers.

Zeroing in on hugely successful drugs like AZT (the first drug to treat HIV/AIDS), Taxol (the best-selling cancer drug in history), and the blockbuster allergy drug Claritin, Dr. Angell demonstrates exactly how new products are brought to market. Drug companies, she shows, routinely rely on publicly funded institutions for their basic research; they rig clinical trials to make their products look better than they are; and they use their legions of lawyers to stretch out government-granted exclusive marketing rights for years. They also flood the market with copycat drugs that cost a lot more than the drugs they mimic but are no more effective.

The American pharmaceutical industry needs to be saved, mainly from itself, and Dr. Angell proposes a program of vital reforms, which includes restoring impartiality to clinical research and severing the ties between drug companies and medical education. Written with fierce passion and substantiated with in-depth research, The Truth About the Drug Companies is a searing indictment of an industry that has spun out of control.

Praise For The Truth About the Drug Companies: How They Deceive Us and What to Do About It…

“In what should serve as the Fast Food Nation of the drug industry, Angell… presents a searing indictment of ‘big pharma’ as corrupt and corrupting.”
—Publishers Weekly

“The Truth About the Drug Companies is a sober, clear-eyed attack on the excesses of drug company power… a lucid, persuasive, and highly important book.”
—The Boston Sunday Globe

“Her prose is clear and readable… Angell does an excellent job [making] a convincing case against Big Pharma.”
—Chicago Sun-Times

“If you’ve ever suffered prescription drug sticker shock, Dr. Marcia Angell’s The Truth About the Drug Companies is the book for you.”
—Newsday

“Put your money on Angell. We need to know why drugs cost what they do, and we need to know how our physicians choose the drugs they give us.”
—St. Louis Post Dispatch

"Pharamceutical companies will need a new miracle pain reliever after the whipping they receive from Marcia Angell in her book….a starting point for serious discussion."
--The Hartford Courant

Former editor-in-chief of The New England Journal of Medicine and now a member of Harvard Medical School’s Department of Social Medicine, Marcia Angell is a nationally recognized authority in the field of health policy and medical ethics and an outspoken critic of the health care system. Time magazine named her one of the twenty-five most influential people in America. Dr. Angell is the author of Science on Trial: The Clash of Medical Evidence and the Law in the Breast Implant Case.
Loading...
or
Not Currently Available for Direct Purchase