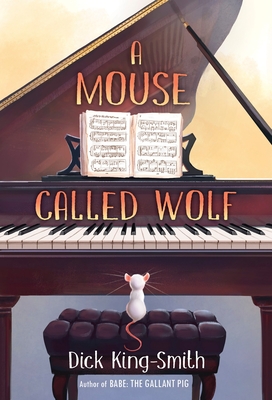 Wolfgang Amadeus Mouse ("Wolf," for short) has a big name for such a little mouse. But the name fits. His favorite pastime is listening to Mrs. Honeybee, the lady of the house, play the piano. If only he could sing along to the music! One day, Wolf decides to try -- and to his surprise, out of his mouth comes a perfect melody.

It's not long before Wolf is singing everything from "Three Blind Mice" to Chopin to the Beatles, all to Mrs. Honeybee's accompaniment. Then an accident leaves Mrs. Honeybee in danger, and it's up to Wolf to save her... the only way he knows how.

Praise For A Mouse Called Wolf…

"A sunny story... which succeeds because of its determined main character, its gentle wit, and its positive message." -- Booklist

Dick King-Smith was born and raised in Gloucestershire, England. After twenty years as a farmer, he turned to teaching and then to writing children’s books that have received critical acclaim on both sides of the Atlantic. Among his well-loved novels are Babe: The Gallant Pig, Harry’s Mad, Martin’s Mice, Ace: The Very Important Pig, The Robber Boy, The Invisible Dog, Three Terrible Trins, Harriet’s Hare, The Stray, A Mouse Called Wolf, and Mr. Ape. Mr. King-Smith passed in away in 2011, but his stories live on.
Loading...
or support indie stores by buying on