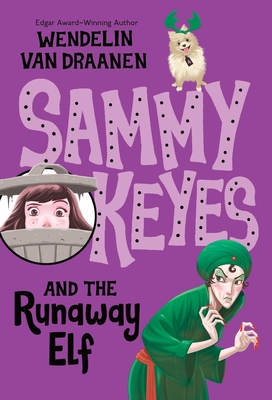 The Christmas parade gets furry in a hurry when three pranksters dressed as wise men toss some cats onto Sammy's float. Dogs shoot off in all directions, and the prize Pomeranian Sammy's supposed to be watching disappears. Turns out the darn fuzzball's been kidnapped. The owner is demanding that Sammy find her doggone dog . . . and she's a woman who knows how to get what she wants.

But Sammy's a pretty tough cookie herself. Dognappers, blackmailers, and wise men be warned!

WENDELIN VAN DRAANEN was a classroom teacher for many years before becoming a full-time writer. The books in the Sammy Keyes mystery series have been embraced by critics and readers alike, with Sammy Keyes and the Hotel Thief receiving the Edgar Allan Poe Award for best children’s mystery. Wendelin is also the author of many award-winning novels, including Flipped, The Running Dream, Runaway, Confessions of a Serial Kisser, Swear to Howdy, The Secret Life of Lincoln Jones, and Wild Bird. You can find her online at WendelinVanDraanen.com and @WendelinVanD, and you can follow Sammy Keyes on Facebook.

Praise For Sammy Keyes and the Runaway Elf…

“If you haven’t met Sammy Keyes yet, now is the time.” —Children’s Literature
or support indie stores by buying on
(This book is on backorder)
Copyright © 2020 American Booksellers Association