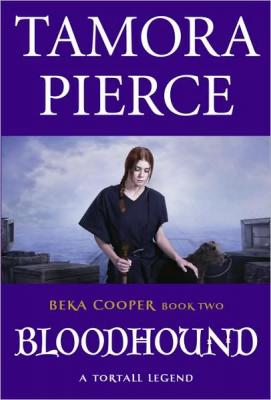 “Beka Cooper returns as a full member of the Provost's Guard in this thrilling follow-up to Terrier. This time, Beka and Goodwin are headed to Port Caynn, where a counterfeiter is endangering the entire realm. And Kel finds that her heart is in as much danger as her country, as her new beau may well be part of the gang she is seeking.”
— Sara Glassman, Little Professor Book Center, Homewood, AL
View the List

Beka Cooper is finally a Dog a full-fledged member of the Provost's Guard, dedicated to keeping peace in Corus's streets. But there's unrest in Tortall's capital. Counterfeit coins are turning up in shops all over the city, and merchants are raising prices to cover their losses. The Dogs discover that gamblers are bringing the counterfeit money from Port Caynn. In Port Caynn, Beka delves deep into the gambling world, where she meets a charming banking clerk named Dale Rowan. Beka thinks she may be falling for Rowan, but she won t let anything or anyone jeopardize her mission. As she heads north to an abandoned silver mine, it won t be enough for Beka be her usual terrier self. She ll have to learn from Achoo to sniff out the criminals to be a Bloodhound. . . .