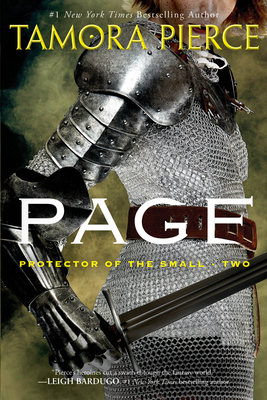 Book 2 of the Protector of the Small Quartet

The second book in the New York Times bestselling series from the fantasy author who is a legend herself: TAMORA PIERCE.

When they think you will fail . . . fail to listen.

As the only female page in history to pass the first year of training to become a knight, Keladry of Mindelan is a force to be reckoned with. But even with her loyal circle of friends at her side, Kel’s battle to prove herself isn’t over yet. She is still trying to master her paralyzing fear of heights and keep up with Lord Wyldon’s grueling training schedule. When a group of pages is trapped by bandits, the boys depend on Kel to lead them to safety. The kingdom’s nobles are beginning to wonder if she can succeed far beyond what they imagined. And those who hate the idea of a female knight are getting desperate—they will do anything to thwart her progress.

Praise For Page: Book 2 of the Protector of the Small Quartet…

“Tamora Pierce’s novels gave me a different way of seeing the world. They were like nothing I’d encountered before. Alanna stormed her way into my thirteen-year-old heart and told me that I could write gorgeous, complicated novels about vibrantly real people in fantastic situations, and to be honest, she’s never left.”
—ALAYA DAWN JOHNSON, award-winning author of Love Is the Drug

TAMORA PIERCE is the #1 New York Times bestselling author of over eighteen novels set in the fantasy realm of Tortall. She first captured the imagination of readers with her debut novel, Alanna: The First Adventure. Since then, her bestselling and award-winning titles have pushed the boundaries of fantasy and young adult novels to introduce readers to a rich world populated by strong, believable heroines. Her books have been translated into many languages, and some are available on audio from Listening Library and Full Cast Audio. In 2013, she won the Margaret A. Edwards Award for her “significant and lasting contribution to young adult literature.” Pierce lives in Syracuse, New York, with her husband, Tim, and their cats, birds, and occasional rescued wildlife. Visit her at TamoraPierce.com and follow her on Twitter at @TamoraPierce.
Loading...
or support indie stores by buying on