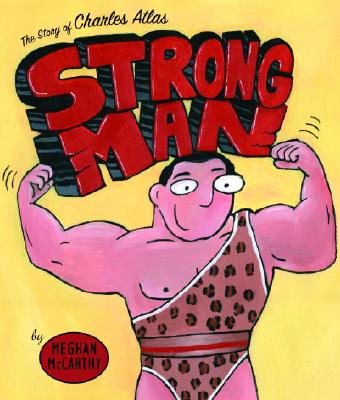 The Story of Charles Atlas

He could tear phone books in half, bend iron bars into giant Us, and pull a 145,000-pound train with his bare hands. But Charles Atlas wasn't always one of America's most famous strong men. Once upon a time, he was a -97-pound weakling- who was picked on by neighborhood bullies.Using her trademark humor, Meghan McCarthy brings to life the story of Charles Atlas, the man who would become -the World's Most Perfectly Developed Man- and, with his fitness campaign, inspired the entire nation to get in shape, eat right, and take charge of our lives.

Meghan McCarthy is the author-illustrator of The Adventures of Patty and the Big Red Bus and Aliens Are Coming!, which was praised in a starred review in School Library Journal as, -a unique treatment of a fascinating topic, and sure to have wide appeal.- She lives in Brooklyn, New York.

Praise For Strong Man: The Story of Charles Atlas…

Starred review, Kirkus Reviews, May 15, 2007:
"[B]oth the humor of the illustrations and the accretion of cool Atlas facts ... keep things light without undercutting the author's genuine admiration for the man."

Starred review, Booklist, June 1 and 15, 2007:
"[A] cheerful introduction to a cultural legend whose messages about self-respect and healthy choices are just as timely today as they were 50 years ago."

Starred review, School Library Journal, July 2007:
"This colorful book captures both the essence and mystique of an American icon."