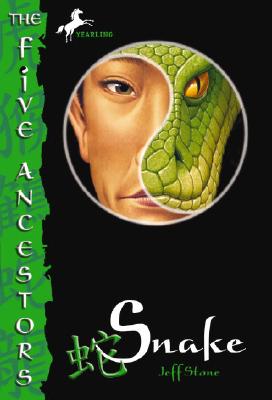 Twelve-year-old Seh is a snake-style master and a keeper of secrets. Close-lipped and ever-watchful, he has used his highly attuned senses to collect information about his brothers, his temple, and even Grandmaster. Now, with the temple and Grandmaster gone, Seh sheds his orange robe like an old skin, joins a bandit gang, and meets a mysterious woman whose name means Cobra all the while trying to stay one step ahead of vengeful Ying

Jeff Stone lives in the Midwest with his wife, their two children, and a python named Yokwan. He holds a black belt in Shaolin-Do kung fu. Like the Five Ancestors, he was adopted as an infant. He began searching for his birth parents when he was 18 and found them 15 years later. He is hard at work on the Five Ancestors #5.
Loading...
or
Not Currently Available for Direct Purchase