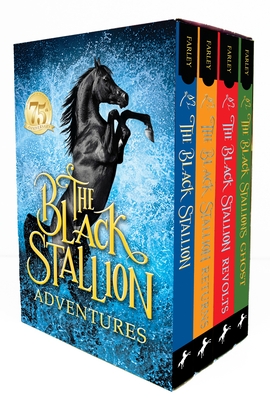 Walter Farley's tales of bravery, instinct, and survival have been captivating readers for almost 65 years. Here, in a handsome gift set, are four of the best, starting with The Black Stallion, where Alec Ramsay saves the Black after a shipwreck. The bond they form cannot be broken. This bond survives their separation in The Black Stallion Returns, when Alec returns the magnificent horse to his original owner in Arabia. Reunited in The Black Stallion’s Ghost, they survive a terrifying curse. Finally, in The Black Stallion Revolts, they are separated again after a plane crash, and Alec is suspected of murder as the Black runs wild! Each gripping tale culminates in a thrilling race to the finish!

Walter Farley’s love for horses began when he was a small boy living in Syracuse, New York, and continued as he grew up in New York City, where his family moved. He is the author of more than twenty books in the Black Stallion series. He also cowrote The Young Black Stallion with his son, Steven.
Loading...
or support indie stores by buying on
(This book is on backorder)