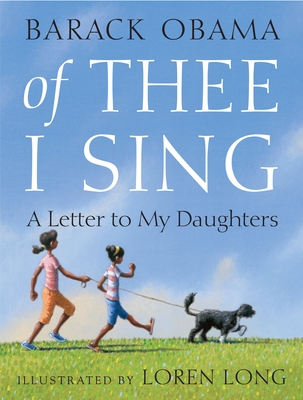 Of Thee I Sing

A Letter to My Daughters

Barack Obama delivers a tender, beautiful letter to his daughters in this powerful picture book illustrated by award-winner Loren Long that's made to be treasured!

In this poignant letter to his daughters, Barack Obama has written a moving tribute to thirteen groundbreaking Americans and the ideals that have shaped our nation. From the artistry of Georgia O'Keeffe, to the courage of Jackie Robinson, to the patriotism of George Washington, Obama sees the traits of these heroes within his own children, and within all of America’s children.

Breathtaking, evocative illustrations by award-winning artist Loren Long at once capture the personalities and achievements of these great Americans and the innocence and promise of childhood.

This beautiful book celebrates the characteristics that unite all Americans, from our nation’s founders to generations to come. It is about the potential within each of us to pursue our dreams and forge our own paths. It is a treasure to cherish with your family forever.

Praise For Of Thee I Sing: A Letter to My Daughters…

"If Barack Obama wants to quit his day job (and maybe he might), he can probably make it as a children’s book author. Certainly, this is a beautiful package: thoughtfully conceived, handsomely illustrated and designed, and with a tight yet evocative text that brings children into the world of 13 famous Americans. Framed as a letter to his daughters (“Have I told you lately how wonderful you are?” the book begins), each double-page spread then asks a question that is exemplified by a person of note. “Have I told you that you are creative?” introduces Georgia O’Keeffe, who “helped us see big beauty in what is small: / the hardness of stone and the softness of feather.” Most of the people briefly profiled are expected names—George Washington, Jackie Robinson, Helen Keller, César Chávez—but there are a few outliers here as well, including Billie Holiday and Sitting Bull. As the spreads turn, other children join (the unnamed) Malia and Sasha on the question page, each embodying their own special gifts and talents. Long’s exceptional artwork has a timeless, Rockwellian quality that serves the text well, and the congregation of the children at the book’s conclusion will have readers looking and looking again. An addendum features a bit more about each person highlighted. Parents will be happy to talk to their own children about how creative or kind or strong they are and reiterate, as the president does, their place in the American family. — Ilene Cooper"—Booklist, starred review

Barack Obama is the forty-fourth president of the United States. Born in Hawaii to a mother from Kansas and a father from Kenya, he himself is now the father of two daughters, Malia and Sasha. It was spending time with them that inspired him to write Of Thee I Sing.

Loren Long is the bestselling and award-winning author and illustrator of many beloved books for children, including Drummer Boy and the New York Times bestseller Otis. Born in Missouri and raised in Lexington, Kentucky, he is also the illustrator of Watty Piper’s The Little Engine That Could, as well as Toy Boat, I Dream of Trains, and Wind Flyers. He lives in Ohio with his wife, Tracy, their two sons, Griffith and Graham, and their dogs, Elle and Moon.
Loading...
or support indie stores by buying on