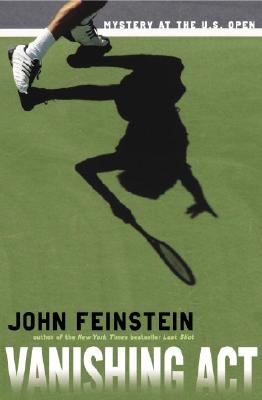 Mystery at the U.S. Open

The two hopeful sports reporters have kept in touch after their wild time at the Final Four, and when Susan Carol manages to score a press pass to cover the first week of the US Open Tennis Tournament in New York, Stevie works out a way to be there as well.

The behind-the-scenes action in the world of professional tennis is overwhelming and occasionally bewildering, but it turns downright inconceivable when a young Russian phenom, Natalia Makarova, disappears right before her second-round match. Somewhere between the locker rooms and the Louis Armstrong Court, one of the most-watched players of the tournament simply vanishes.

The media coverage is staggering. Everyone is looking for Natalia--including Stevie and Susan Carol. Was she kidnapped? Did she run? Is she even still alive? The rumors are growing wilder by the hour. But they don't even come close to the shocking truth...

Praise For Vanishing Act: Mystery at the U.S. Open…

Praise for Last Shot:
"A page-turning thriller and a basketball junkie's bonanza."--USA Today
"Readers will enjoy the rivalry and chemistry between oustpoken but insecure Stevie and savvy-beyond-her-years Susan Carol."--School Library Journal
"The next best thing to an all-access pass."--The Bulletin for the Center of Children's Books
"You'll feel as if you have a courtside seat at the SuperDome. Last Shot is Feinstein's first entry into fiction for young people, and it's an impressive one. The story is intriguing, the dialogue snappy and the finale exciting."--Bookpage
"Veteran sportswriter John Feinstein uses simple prose, lively dialogue, and authentic details to recreate the pageantry of college basketball's big show."--Kirkus Reviews
"You couldn't have a better guide than Feinstein."--Des Moines Register