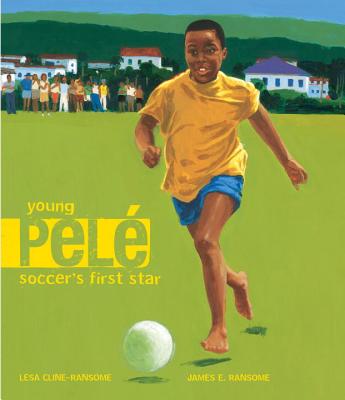 HOW DID A POOR BOY named Edson—who kicked rocks down roads and dribbled balls made from rags—go on to become Pelé, the greatest soccer player of all time? While other kids memorized letters, Edson memorized the scores of soccer matches. And when Edson finally played in a youth soccer tournament in the town of Bauru, Brazil, he focused on only one thing from the moment the whistle blew: the goal.

Here is the picture book biography of the boy who overcame tremendous odds to become the world champion soccer star Pelé.

Lesa Cline-Ransome and James E. Ransome are the author and illustrator of "Satchel Paige "and "Major Taylor, Champion Cyclist." James is also the illustrator of "Sky Boys: How They Built the Empire State Building "by Deborah Hopkinson, an ALA Notable Book and "Boston Globe-Horn Book "Award Honor Book; "Creation," which won a Coretta Scott King Award for Illustration; and "Let My People Go "by Patricia C. McKissack, winner of an NAACP Image Award. They live in Poughkeepsie, New York.