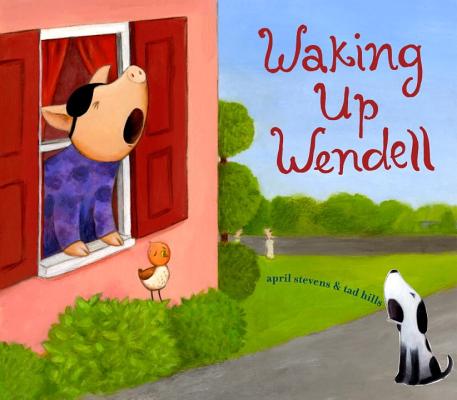 
So starts the story of how a chain of events results in everyone on one street waking up. The bird's song awakens Mr. Krudwig at #2 Fish Street, whose grumbling wakes up Leopold, his dog, who barks "RAPPITYRAPPITY-RAP RAPPITY-RAPPITY-RAP" . . . and wakes up Mrs. Musky, at #3 Fish Street. The antics go on and on until, finally, Lilah Hall's singing in the shower at #9 awakens the last person left who is still asleep, none other than the littlest resident at #10 Fish Street: baby Wendell Willamore.


Praise For Waking Up Wendell…

Starred Review, Publishers Weekly, September 3, 2007:
"With its punchy prose, unexpected plot turns and surprisingly sweet ending, it's a cinch for a read-aloud treat."

Starred Review, Kirkus Reviews, August 1, 2007:
"As absolutely charming as a sunny morning can be."

April Stevens is the author of the picture book "Edwin Speaks Up" and the adult novel "Angel, Angel." She lives in Cornwall, Connecticut. Tad Hills is the author and illustrator of "How Rocket Learned to Read," a "New York Times Bestseller," and it's sequel "Rocket Writes a Story." He is also the author and illustrator of "Duck & Goose," a "New York Times "Bestseller and ALA Notable Book, and its sequel, "Duck, Duck, Goose." A painter, actor, and obsessive Halloween costume maker, he lives in Brooklyn, New York, with his wife and children.
Loading...
or
Not Currently Available for Direct Purchase