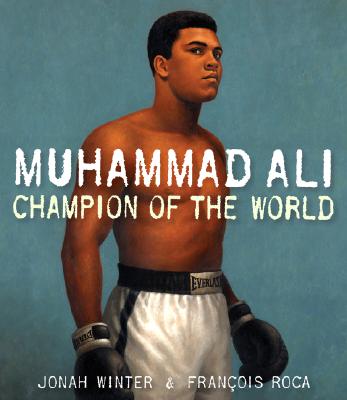 Champion of the World

In the history of legendary boxers, there was Joe Louis and Sonny Liston . . . and then, “the heavens opened up, and there appeared a great man descending on a cloud, jump-roping into the Kingdom of Boxing. And he was called Cassius Clay.” Clay let everyone know that he was the greatest boxer in the world. He converted to the Nation of Islam, refused to be drafted into a war in which he didn’t believe, and boxed his way back to the top after being stripped of his title. The man that came to be known as Muhammad Ali was heard in a voice no one will ever forget.

Jonah Winter is the author of many acclaimed picture books, including "Dizzy," about Dizzy Gillespie; "Diego," a biography of Diego Rivera; F"rida, " about artist Fried Kahlo, which was a Parents' Choice Gold Medal winner; and "The 39 Apartments of Ludwig Van Beethoven." He lives in Pittsburgh, Pennsylvania.

Francois Roca is the illustrator of several books, including "Twenty-One

Elephants" and S"till Standing by April Prince Jones." He lives in Paris.

Praise For Muhammad Ali: Champion of the World…