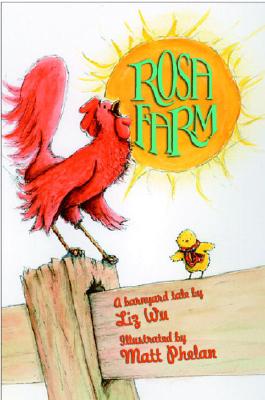 Gallileon, a young rooster, has to crow to the sun on Sunday morning when his father is sent to compete at the county fair. After a few starts and stops, Gallileon manages to wake up the sun and the rest of the farm, but when the geese decide to play a mean trick on him, the sun disappears at high noon. Where did it go? Can Gallileon's irrepressible little sister Pepina save her brother from the ultimate humiliation?

“LIZ WU HAS developed a cast of engaging and endearing characters. Gallileon and Pepina are particularly entertaining with their true-to-life, often-complicated, brother/sister relationship. The plot is quick paced and will keep the interest of readers new to chapter books. Occasional line drawings depict the animals’ emotions. [An] engaging romp.” —School Library Journal


“Wu’s writing is lovely and the dialogue among her characters sparkles. It is to be hoped that Rosa Farm’s inhabitants return to share future stories.” —Children’s Literature