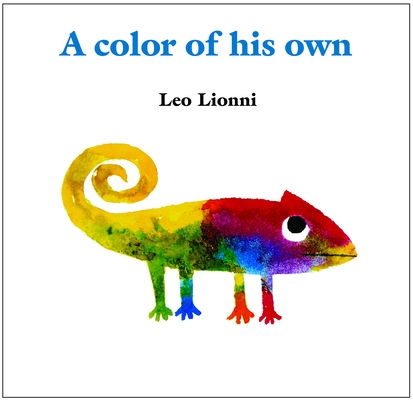 A Color of His Own

The classic story about searching for somewhere to belong, from four-time Caldecott honor winner Leo Lionni.


Elephants are gray. Pigs are pink. Only the chameleon has no color of his own. He is purple like the heather, yellow like a lemon, even black and orange striped like a tiger! Then one day a chameleon has an idea to remain one color forever by staying on the greenest leaf he can find. But in the autumn, the leaf changes from green to yellow to red . . . and so does the chameleon. When another chameleon suggests they travel together, he learns that companionship is more important than having a color of his own. No matter where he goes with his new friend, they will always be alike.

Praise For A Color of His Own…

"Lionni's signature watercolors span the rainbow in this story of a chameleon who, while searching for his identity, finds a friend with whom he can share his changeable nature." —Publishers Weekly

"As captivating now as it was when first published in 1975." —Children's Literature

Leo Lionni, an internationally known designer, illustrator, and graphic artist, was born in Holland and lived in Italy until he came to the United States in 1939. He was the recipient of the 1984 American Institute of Graphic Arts Gold Medal and was honored posthumously in 2007 with the Society of Illustrators’ Lifetime Achievement Award. His picture books are distinguished by their enduring moral themes, graphic simplicity and brilliant use of collage, and include four Caldecott Honor Books: Inch by Inch, Frederick, Swimmy, and Alexander and the Wind-Up Mouse. Hailed as “a master of the simple fable” by the Chicago Tribune, he died in 1999 at the age of 89.
Loading...
or support indie stores by buying on