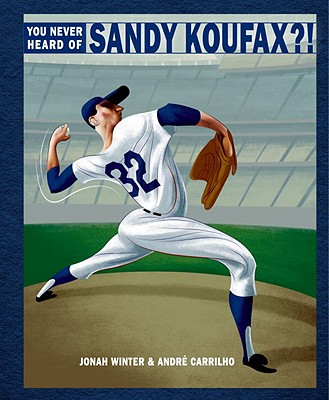 In this striking picture book biography, an old-timer tells us what made Sandy Koufax such an amazing baseball player. We learn that the beginning of his career with the Brooklyn Dodgers was rocky, that he was shy with his teammates, and experienced discrimination as one of the only Jews in the game. We hear that he actually quit, only to return the next season--different--firing one rocket after another over the plate. We watch him refuse to play in the 1965 World Series because it is a Jewish high holy day. And we see him in pain because of an overused left arm, eventually retiring at the peak of his career. Finally, we are told that people are still -scratchin' their heads over Sandy, - who remains a modest hero and a mystery to this day.
Accompanied by sidebars filled with statistics, this Parents Magazine Best Book of the Year and Booklist Top of the List is sure to delight budding baseball fans.

Jonah Winter is the author of many award-winning books about baseball figures, including Roberto Clemente: Pride of the Pittsburgh Pirates; You Never Heard of Willie Mays?!; and You Never Heard of Casey Stengel?! His other stellar titles include Here Comes the Garbage Barge!, a New York Times Best Illustrated Book; Frida, a Parents' Choice Gold Medal winner; and Dizzy, the recipient of Best Book of the Year citations from Booklist, School Library Journal, The Horn Book, The Bulletin, and Kirkus Reviews. Andre Carrilho is the illustrator of Porch Lies by Patricia McKissack, which received three starred reviews. This is his first picture book. He lives in Lisbon, Portugal.

Praise For You Never Heard of Sandy Koufax?!…

Starred Review, Booklist, December 15, 2008:
“Hand this book to kids unconvinced by Koufax’s mind-boggling numbers, or to the ones who know why they’re so mind boggling to begin with.”

Starred Review, Publishers Weekly, January 5, 2009:
"Not just a home run, this book is a grand slam."