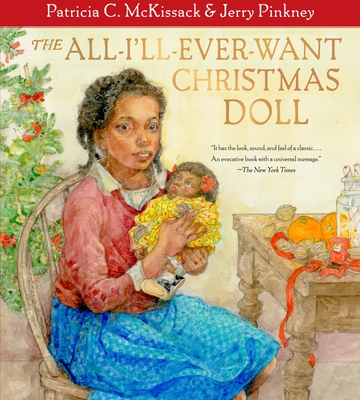 Newbery Honor–winning author McKissack and Caldecott Medal–winning illustrator Pinkney have outdone themselves in this heart-warming picture book infused with humor and the true spirit of Christmas.

Christmas always comes to Nella’s house, but Santa Claus brings gifts only once in a while. That’s because it’s the Depression and Nella’s family is poor. Even so, Nella’s hoping that this year she and her two sisters will get a beautiful Baby Betty doll.

On Christmas morning, the girls are beside themselves with excitement! There is Baby Betty, in all her eyelash-fluttering magnificence. “Mine!” Nella shouts, and claims the doll for herself. But soon she discovers that Baby Betty isn’t nearly as much fun as her sisters. Would it be more fun to share this very best gift with them after all?

Jerry Pinkney received the Caldecott Medal for his wordless retelling of The Lion and the Mouse. He has illustrated more than one hundred books, among them five Caldecott Honor books, including Mirandy and Brother Wind, written by Patricia C. McKissack; five New York Times Best Illustrated Books; and five Coretta Scott King Award winners. Some of his most beloved titles are The Talking Eggs, John Henry, The Ugly Duckling, Goin’ Someplace Special, and The Tortoise and the Hare. Mr. Pinkney lives in Croton-on-Hudson, New York, with his wife, author Gloria Jean Pinkney.


Praise For The All-I'll-Ever-Want Christmas Doll…

Starred Review, Booklist, September 15, 2007:
"Parents looking for books on sharing will find this an appealing exploration of the subject, teachers seeking picture books set during the Depression will find many details that bring the period to life. A gentle lesson that plays into the spirit of the holiday."
-Carolyn Phelan