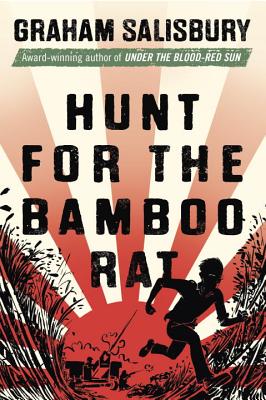 Hunt for the Bamboo Rat (Prisoners of the Empire Series)

Based on a true story, this World War II novel by Scott O’Dell Award winner Graham Salisbury tells how Zenji, 17, is sent from Hawaii to the Philippines to spy on the Japanese.


Zenji Watanabe was born in Hawaii. He’s an American, but the Japanese wouldn’t know it by the look of him. And that’s exactly what the US government is counting on.

Because he speaks both English and Japanese perfectly, the army recruits Zenji for a top-secret mission to spy on the Japanese. If they discover his true identity, he’ll be treated as a traitor and executed on the spot.

As World War II boils over in the Pacific, Zenji is caught behind enemy lines. But even though his Japanese heritage is his death warrant, it’s also his key to outwitting the enemy and finding the strength to face the terrors of battle, the savagery of the jungle, and the unspeakable cruelty of war.

The riveting Hunt for the Bamboo Rat is based on a true story and follows in the path of author Graham Salisbury’s other highly acclaimed Prisoners of the Empire titles, which began with the award-winning Under the Blood-Red Sun.

"Salisbury has once again crafted a fine novel, based on an actual person, about first-generation Americans of Japanese descent and the clash of culture and national identity that World War II accentuated. . . .  The story will leave readers spellbound." —Kirkus Reviews, Starred

"Fast-paced and compelling, this title will be enjoyed by voracious and reluctant readers." —SLJ

"The history is fascinating, and Zenji is a fictional hero readers will long remember." —The Horn Book

Kirkus Reviews starred review, September 2014:
“Written in short, rapid-fire paragraphs that move the plot along at a brisk pace, the story will leave readers spellbound. A gripping saga of wartime survival.”

"...the history is fascinating, and Zenji is a fictional hero readers will long remember." - Horn Book Review

Graham Salisbury’s family has lived in the Hawaiian Islands since the early 1800s. He grew up on Oahu and Hawaii and graduated from California State University. He received an MFA from Vermont College of Norwich University, where he was a member of the founding faculty of the MFA program in writing for children. He lives with his family in Portland, Oregon.
Graham Salisbury’s books have won many prizes. Blue Skin of the Sea won the Bank Street Child Study Association Children’s Book Award; Under the Blood-Red Sun won the Scott O’Dell Award for Historical Fiction, the Oregon Book Award, Hawaii’s Nene Award, and the California Young Reader Medal; Shark Bait won the Oregon Book Award and a Parents’ Choice Silver Honor; Lord of the Deep won the Boston Globe–Horn Book Award. He has also written the Calvin Coconut series for younger readers.
Graham Salisbury is a recipient of the John Unterecker Award for Fiction and the PEN/Norma Klein Award. Visit him online at grahamsalisbury.com.
Loading...
or
Not Currently Available for Direct Purchase