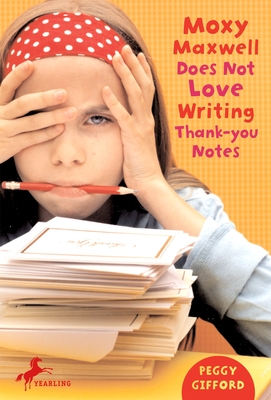 Every tween reader’s favorite procrastinator is back . . . in paperback!

It isn't as though Moxy isn’t grateful for her Christmas presents. She is. She’s just not thrilled that she has to write a thank-you note for each one by tomorrow . . . or she will not be allowed to fly to Hollywood to attend a starstudded
Hollywood bash with the father she hasn’t seen in three years. And writing thank-you notes is not something that a world-class Creative Type relishes doing. But it is more than writing thank-you notes that finally prevents Moxy from taking her trip. When her father cancels at the last minute, Moxy is forced to deal with the reality of a situation she doesn’t want to accept, and can’t change. But, not surprisingly, she rises to the occasion brilliantly.

“Resourceful and resilient, Moxy is a pleasure to meet again.”—Kirkus Reviews, Starred

Praise For Moxy Maxwell Does Not Love Writing Thank-you Notes…

Peggy Gifford is the author of Moxy Maxwell Does Not Love Stuart Little, which Kirkus Reviews, in a starred review, hailed as “brilliantly accessible.” She lives in New York, New York, and Myrtle Beach, South Carolina.

Valorie Fisher is the author-illustrator of When Ruby Tried to Grow Candy and How High Can a Dinosaur Count?, which received two starred reviews. She lives in Cornwall, Connecticut.
Loading...
or support indie stores by buying on
(This book is on backorder)