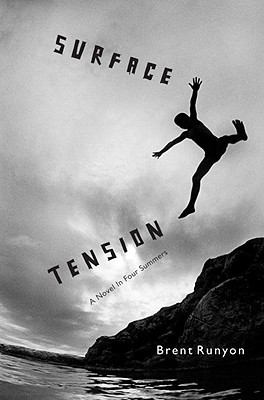 A Novel in Four Summers

The cottage on the lake is always the same, but Luke is changing. At thirteen he’s excited. At fourteen he’s cool. At fifteen he’s pissed off. At sixteen he’s in love.

Through four summers’ worth of trips to the emergency room, campfires and house fires, parties and feuds with neighbors, Luke is doing his best to navigate life. He makes discoveries, makes mistakes, freaks out, and comes to see things in a new light.

Brent Runyon has crafted a remarkable portrait of a boy at four distinct points in his life and literally shows us his coming of age. It’s a story that explores what is ever-changing and what is timeless, and how we are shaped by both the people and places we love.

Praise For Surface Tension: A Novel in Four Summers…

Starred Review, Kirkus Reviews, February 1, 2009:
“Runyon reveals how life changes us all and how these unavoidable changes can be full of both turmoil and wonder.”

Starred Review, Publishers Weekly, February 23, 2009:
"The detail-rich story offers the type of intensity that sneaks up on readers."

Brent Runyon is a writer and regular contributor to public radio programs, including "This American Life, " where portions of his award-winning memoir, "The Burn Journals, " first aired. "Booklist" praised "The Burn Journals" as "the defining book of a new genre, one that gazes unflinchingly at boys on the emotional edge." In his novels "Maybe" and "Surface Tension, " he retains that raw honesty. Mr. Runyon lives on Cape Cod, Massachusetts.
Loading...
or
Not Currently Available for Direct Purchase