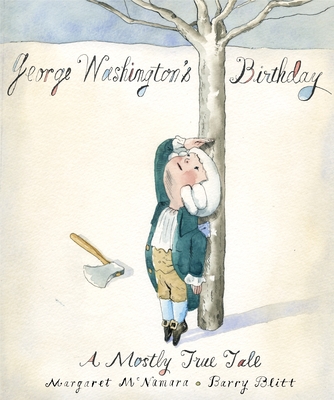 A perfect picture book biography from award-winning author Margaret McNamara and New Yorker artist Barry Blitt comes this partly true and completely funny story of George Washington's 7th birthday. In this clever approach to history, readers will discover the truths and myths about George Washington. Did George Washington wear a wig? No. Did George Washington cut down a cherry tree? Probably not. Readers young and old who are used to seeing George Washington as an old man, will get a new look at the first president—as a kid. Perfect for classrooms, Presidents' Day, or as a birthday gift.

MARGARET MCNAMARA is the author of How Many Seeds in a Pumpkin?, called "illuminating" by FamilyFun Magazine and recommended as "a first-purchase consideration" by School Library Journal, and most recently of The Three Little Aliens and the Big Bad Robot, illustrated by Mark Fearing. She is also the author of the popular Robin Hill School early reader series which sold more than 1.5 million copies. She lives in New York City.

BARRY BLITT's illustrations have appeared on the cover of the New Yorker and have also graced the pages of the Chicago Tribune, the New York Times, Child Magazine, and Entertainment Weekly. He is the illustrator of the children's books The 39 Apartments of Ludwig Van Beethoven by Jonah Winter, as well as Once Upon a Time, the End: Asleep in 60 Seconds by Geoffrey Kloske.