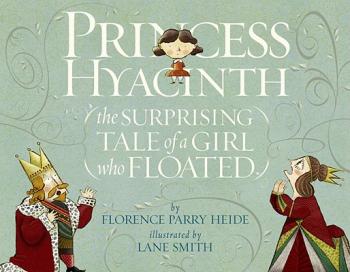 Princess Hyacinth (The Surprising Tale of a Girl Who Floated)

“Princess Hyacinth has a problem. She floats. What's a girl to do? Make like a balloon, of course! Fun and excitement ensues until she loses her tether ... and, in the process, finds a Prince Charming. Lane Smith's nuanced illustrations bring this fairy tale to life.”
— Summer Dawn Laurie, Books Inc., San Francisco, CA
View the List

Princess Hyacinth has a problem: she floats. And so the king and queen have pebbles sewn into the tops of her socks, and force her to wear a crown encrusted with the heaviest jewels in the kingdom to keep her earthbound. But one day, Hyacinth comes across a balloon man and decides to take off all her princess clothes, grab a balloon, and float free. Hooray! Alas, when the balloon man lets go of the string . . . off she goes. Luckily, there is a kite and a boy named Boy to save her.

Starred Review, Publishers Weekly, August 17, 2009:
"Heide possesses the ability to tell a moralistic tale without a hint of didacticism."

Florence Parry Heide is the award-winning author of more than fifty books, including the Treehorn titles, illustrated by Edward Gorey.