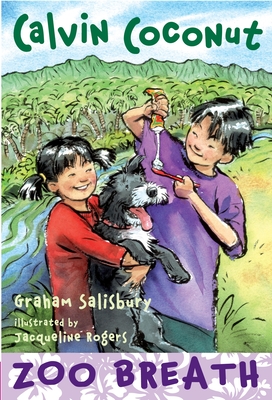 Calvin's mom says his new dog Streak smells bad.  Especially her breath. Calvin's convinced that Streak's stink is a good one, but he's worried. If he doesn't solve Streak's problem soon, mom might make him give his beloved new dog back to the shelter. So when his teacher assigns his students a discovery project, Calvin decides to discover the worst stinks—and find a solution to Streak's bad breath.

GRAHAM SALISBURY is the author of three Calvin Coconut books: Trouble Magnet, The Zippy Fix, Dog Heaven, and Hero of Hawaii, as well as several novels for older readers, including the award-winning Lord of the Deep, Blue Skin of the Sea, Under the Blood-Red Sun, Eyes of the Emperor, House of the Red Fish, and Night of the Howling Dogs.

JACQUELINE ROGERS has illustrated more than 90 books for young readers. She studied illustration at the Rhode Island School of Design.
Loading...
or support indie stores by buying on