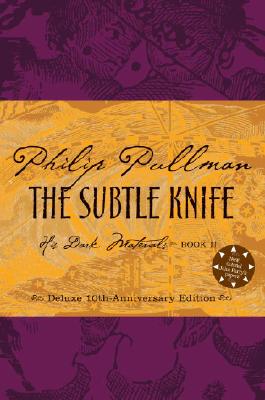 PUBLISHED IN 40 COUNTRIES, with over 5 million copies in print in North America alone, Philip Pullman's His Dark Materials trilogy -The

Golden Compass, The Subtle Knife, and The Amber Spyglass - has graced the New York Times, Wall Street Journal, San Francisco Chronicle, Book Sense, and Publishers Weekly bestseller lists. For these deluxe editions, Philip Pullman has created new material: papers of Colonel John Parry for the 10-year anniversary of The Subtle Knife (15 new pages), and letters of Mary Malone from secret Magisterium files for The Amber Spyglass (10 new pages). In each book, the new material has been illustrated and handlettered by renowned artist Ian Beck and will be included in the backmatter.

Each deluxe edition also features a ribbon bookmark, rough-edged pages, and Pullman's own chapter-opening spot art. These two volumes join the 2006 deluxe edition of The Golden Compass to form a gorgeous collectible set of the trilogy - a perfect gift for loyal Pullman readers and new fans alike.

Philip Pullman has won many distinguished prizes, including the Carnegie Medal for "The Golden Compass" (and the reader-voted "Carnegie of Carnegies" for the best children's book of the past seventy years); the Whitbread (now Costa) Book of the Year Award for "The Amber Spyglass"; a Booker Prize long-list nomination ("The Amber Spyglass"); Parents' Choice Gold Awards ("The Subtle Knife" and "The Amber Spyglass"); and the Astrid Lindgren Memorial Award, in honor of his body of work. In 2004, he was appointed a Commander of the Order of the British Empire.

Philip Pullman is the author of many books for young readers, including two volumes related to the His Dark Materials trilogy: "Lyra's Oxford" and "Once Upon a Time in the North." He lives in Oxford, England. To learn more, please visit www.philip-pullman.com and www.hisdarkmaterials.com.
Loading...
or
Not Currently Available for Direct Purchase