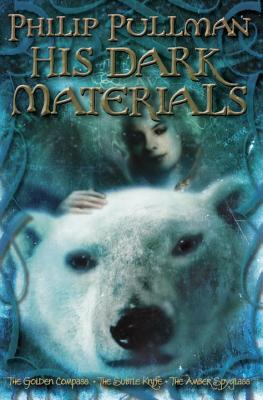 ***** THE BOOK OF DUST, the long-awaited new novel from Philip Pullman set in the world of His Dark Materials, has been hailed by the New York Times as "A stunning achievement"*****

The Golden Compass, The Subtle Knife, and The Amber Spyglass are available together in one volume perfect for any fan or newcomer to this modern fantasy classic series that has graced the New York Times, Wall Street Journal, San Francisco Chronicle, Book Sense, and Publishers Weekly bestseller lists. These thrilling adventures tell the story of Lyra and Will--two ordinary children on a perilous journey through shimmering haunted otherworlds. They will meet witches and armored bears, fallen angels and soul-eating specters. And in the end, the fate of both the living--and the dead--will rely on them. Phillip Pullman's spellbinding His Dark Materials trilogy has captivated readers for over twenty years and won acclaim at every turn. It will have you questioning everything you know about your world and wondering what really lies just out of reach. Honors and Praise for His Dark Materials:
An Entertainment Weekly All-Time Greatest Novel

A Newsweek Top 100 Book of All Time "Arguably the best juvenile fantasy novel of the past twenty years." --The Washington Post "Very grand indeed." --The New York Times "Pullman is quite possibly a genius." --Newsweek

PHILIP PULLMAN is one of the most acclaimed writers working today. He is best known for the His Dark Materials trilogy (The Golden Compass, The Subtle Knife, The Amber Spyglass), which has been named one of the top 100 novels of all time by Newsweek and one of the all-time greatest novels by Entertainment Weekly. He has also won many distinguished prizes, including the Carnegie Medal for The Golden Compass (and the reader-voted "Carnegie of Carnegies" for the best children's book of the past seventy years); the Whitbread (now Costa) Award for The Amber Spyglass; a Booker Prize long-list nomination (The Amber Spyglass); Parents' Choice Gold Awards (The Subtle Knife and The Amber Spyglass); and the Astrid Lindgren Memorial Award, in honor of his body of work. In 2004, he was appointed a Commander of the Order of the British Empire. It has recently been announced that The Book of Dust, the much anticipated new book from Mr. Pullman, also set in the world of His Dark Materials, will be published as a major work in three parts, with the first part to arrive in October 2017. Philip Pullman is the author of many other much-lauded novels. Other volumes related to His Dark Materials: Lyra's Oxford, Once Upon a Time in the North, and The Collectors. For younger readers: I Was a Rat!; Count Karlstein; Two Crafty Criminals; Spring-Heeled Jack, and The Scarecrow and His Servant. For older readers: the Sally Lockhart quartet: The Ruby in the Smoke, The Shadow in the North, The Tiger in the Well, and The Tin Princess; The White Mercedes; and The Broken Bridge. Philip Pullman lives in Oxford, England. To learn more, please visit philip-pullman.com and hisdarkmaterials.com. Or follow him on Twitter at @PhilipPullman.
Loading...
or
Not Currently Available for Direct Purchase