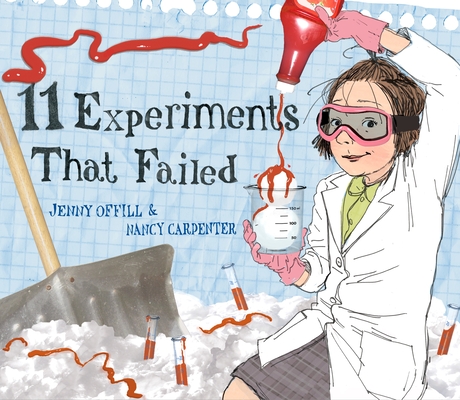 “The inquisitive young scientist in this picture book is part Eloise, part Ms. Frizzle. She tests each of her hypotheses -- such as that ketchup and snow are the only food groups a kid needs -- with pure scientific standards. Fantastic illustrations demonstrate the scientific method and show the reader what goes on behind the scenes, for example, when you try to send a bottle to the ocean by flushing it down the toilet. This book had me giggling at every page.”
— Neysa Jensen, The Rediscovered Bookshop, Boise, ID
View the List

"This is a most joyful and clever whimsy, the kind that lightens the heart and puts a shine on the day," raved Kirkus Reviews in a starred review.

Is it possible to eat snowballs doused in ketchup—and nothing else—all winter? Can a washing machine wash dishes? By reading the step-by-step instructions, kids can discover the answers to such all-important questions along with the book's curious narrator. Here are 12 "hypotheses," as well as lists of "what you need," "what to do," and "what happened" that are sure to make young readers laugh out loud as they learn how to conduct science experiments (really!).

Jenny Offill and Nancy Carpenter—the ingenious pair that brought you 17 Things I'm Not Allowed to Do Anymore—have outdone themselves in this brilliant and outrageously funny book.

NANCY CARPENTER is the illustrator of 17 Things I'm Not Allowed to Do Anymore by Jenny Offill, called "picture-perfect" in a starred review by School Libary Journal; Imogene's Last Stand by Candace Fleming; Apples to Oregon, an ALA-ALSC Notable Children's Book, and Fannie in the Kitchen, both by Deborah Hopkinson; Sitti's Secrets by Naomi Shihab Nye, winner of the Jane Addams Picture Book Award; and Masai and I by Virginia Kroll. She lives in Brooklyn, New York.

Praise For 11 Experiments That Failed…

Starred Review, Kirkus Reviews, August 15, 2011:
"This is a most joyful and clever whimsy, the kind that lightens the heart and puts a shine on the day. Go ahead, break a few dishes in the washing machine, see the humor and enjoy this fine poke at every science fair that ever was."
or support indie stores by buying on
Copyright © 2020 American Booksellers Association