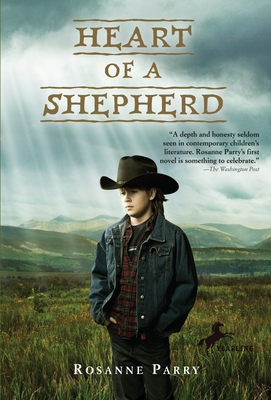 Heart of a Shepherd

“With his father shipped off to Iraq, grandfather getting older and his older brothers away at college, the fate of the ranch lies heavily on Brother, who is determined to take care of things just as his father would have. A beautifully written, simple book about not-so-simple things like faith and family.”
— Jennifer Laughran, Books Inc., San Francisco, CA
View the List

From acclaimed author of A Wolf Called Wander, Rosanne Parry welcomes readers into the Heartland in this tender coming-of-age story.

When Brother's dad is shipped off to Iraq, along with the rest of his reserve unit, Brother must help his grandparents keep the ranch going. He’s determined to maintain it just as his father left it, in the hope that doing so will ensure his father’s safe return. The hardships Brother faces will not only change the ranch, but also reveal his true calling.

Praise For Heart of a Shepherd…

“Isn’t it wonderful that there are books like this—about good people, about striving, and about doing the right thing!”
—Patricia Reilly Giff, two-time recipient of the Newbery Honor

“A true evocation of modern ranch life, a life rooted in community and love, a life seldom written about with such grace and authenticity.”
—Molly Gloss, finalist for the PEN/Faulkner Award for Fiction

The stark beauty of eastern Oregon and the shared purpose of the ranching community made a lasting impression on Rosanne Parry. She found a similar rapport among the military families she knew when her husband was deployed to Iraq. She now lives in an old farmhouse in Portland, Oregon, with bunnies and chickens and her husband and four kids.
Loading...
or
Not Currently Available for Direct Purchase