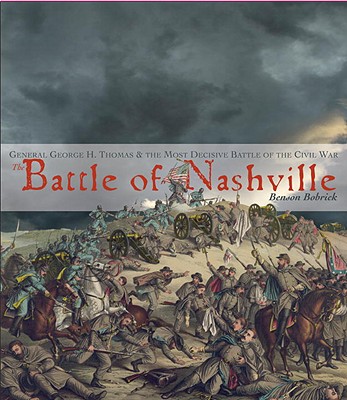 The Battle of Nashville (Hardcover)

General George H. Thomas & the Most Decisive Battle of the Civil War

A dynamic Civil War book with a fresh angle from an award-winning writer.  Bobrick profiles General George H. Thomas, an overlooked scion of the Civil War, and shows the military choices that saved the Union.  Also examined are President Lincoln, the causes of the war and the various personalities who have shaped our understanding of the war today.  This compelling book, rich with visuals including maps, photos, original documents, and more, offers new insights into a key topic for American homes and classrooms. A particularly exciting read for boys.

The Battle of Nashville is another contribution to Knopf's list of high quality nonfiction such as Children of the Dust Bowl by Jerry Stanley and Shipwreck at the Bottom of the World by Jennifer Armstrong.

Benson Bobrick earned his doctorate from Columbia University and is the author of several critically acclaimed books for adults, including Wide as the Waters: The Story of the English Bible and the Revolution It Inspired, Angel in the Whirlwind: The Triumph of the American Revolution, and Testament: A Soldier's Story of the Civil War. In 2002 he received the Literature Award of the American Academy and Institute of Arts and Letters. He and his wife, Hilary, divide their time between New York and Vermont.
or
Not Currently Available for Direct Purchase
Copyright © 2020 American Booksellers Association