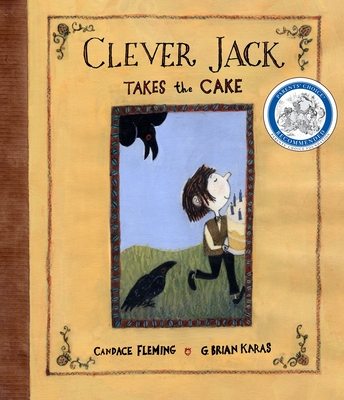 Take a bite out of this deliciously funny original fairy tale, which received four starred reviews and was named a Best Book of the Year by Booklist, School Library Journal, Kirkus Reviews, and the Bank Street College of Education.

What would you do if you were invited to the princess’s tenth birthday party but didn’t have money for a gift? Well, clever Jack decides to bake the princess a cake.

Now he just has to get it to the castle in one piece. What could possibly go wrong?

Candace Fleming and G. Brian Karas, creators of the bestselling picture book Muncha! Muncha! Muncha!, have teamed up again to bring us a modern fairy tale starring a determined boy and a story-loving princess with a good sense of humor. While girls will fall for a story featuring a princess’s birthday party, Jack’s adventures with trolls, bears, and gypsies make this the perfect read for young boys as well—and ideal for storytime.

Starred Review, Booklist, July 2010:
"An original fairy tale that has the makings of a story-hour classic. . . This standout picture book emphasizes resourcefulness and the power and pleasure of a well-told tale."

Starred Review, School Library Journal, July 2010:
This entertaining adventure is packed with action. Karas's schratchy gouache and pencil cartoon illustrations are as detail-rich as the text itself."

Candace Fleming is the clever author of The Great and Only Barnum, a Publishers Weekly and Kirkus Reviews Best Book of the Year; The Lincolns, a Boston Globe–Horn Book Award winner and a finalist for the Los Angeles Times Book Prize; and Ben Franklin’s Almanac and Our Eleanor, both ALA-ALSC Notable Children’s Books. Her books also include Imogene’s Last Stand, Muncha! Muncha! Muncha!, Gabriella’s Song, and the Aesop Elementary School series. She lives in Oak Park, Illinois. You can visit her at www.candacefleming.com.

G. Brian Karas is the prolific, versatile, and acclaimed illustrator of many books for children, including How Many Seeds in a Pumpkin? by Margaret McNamara, winner of a Christopher Award; Are You Going to Be Good? by Cari Best, a New York Times Best Illustrated Book; Muncha! Muncha! Muncha! by Candace Fleming, an ALA-ALSC Notable Book; and Home on the Bayou: A Cowboy’s Story, which he also wrote and which received the Boston Globe–Horn Book Award. He lives in New York’s Hudson Valley. Visit him at www.gbriankaras.com.
Loading...
or
Not Currently Available for Direct Purchase