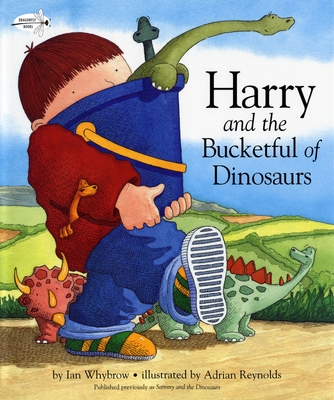 Harry finds some old dinosaurs in his Grandma’s attic. He cleans them up and makes them his own, carefully (and accurately) naming each one. Harry and his dinosaurs go everywhere together. But one day, after an exciting train ride, Harry accidentally leaves the dinosaurs on the train. Silly, charming illustrations accompany this whimsical text of a child being a child.

Ian Whybrow became a published author at age 10, when the local paper printed his poem about a dead cat. Since then, he has written numerous books for children, ranging from picture books to novels. Harry and the Bucketful of Dinosaurs (under its original title, Sammy and the Dinosaurs) was an American Bookseller Kids’ Pick of the Lists selection. He lives with his wife and two daughters in Herefordshire, England.

Adrian Reynolds first became interested in children’s books while working in a children’s bookstore. He has illustrated several books and is the author and illustrator of the Pete and Polo books from Orchard Books. He lives in Cambridge, England.
Loading...
or support indie stores by buying on