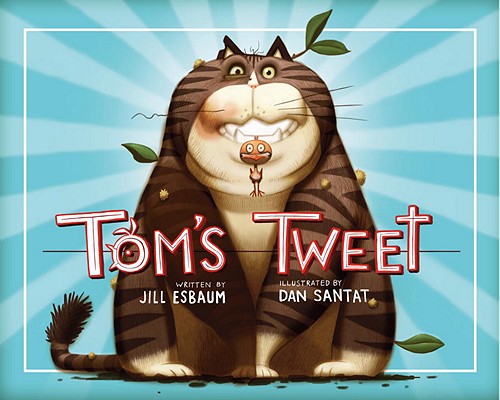 Tom is on the hunt for a tasty morning treat when he spies a flip-flapping, fluttery bird just there for the taking. Hello, breakfast! But little Tweet with his big black button eyes is too skinny to eat. Tom is determined to not get involved, but he can't just leave Tweet there . . . frightened, unhappy, alone. Consarn it! It's just Tom's luck to get stuck with a Tweet!

"Totally tweet-rific. . . . Esbaum’s tweet tale will have listeners in stitches (especially the wormy bits), and Santat’s Photoshopped cartoon illustrations of bulky Tom and the goggle-eyed tweets are as expressive as they are goofy." —Kirkus Reviews

JILL ESBAUM is the award-winning author of several books for young readers, including Stanza, To the Big Top, Estelle Takes a Bath, and Ste-e-e-e-eamboat A-Comin'!. She lives on a farm near Dixon, Iowa, with her husband and family. She loves visiting schools, as well as teaching adults how to write for children in numerous classes and workshops.

DAN SANTAT is the illustrator of The Secret Life of Walter Kitty by Barbara Jean Hicks, Always Lots of Heinies at the Zoo by Ayun Halliday, Chicken Dance by Tammi Sauer, the Otto Undercover books by Rhea Perlman, and Oh No (Or How My Science Project Destroyed the World) by Mac Burnett. He is also the creator of Disney's animated hit The Replacements, and lives in Southern California with his wife, two kids, a rabbit, a bird, and one cat.
Loading...
or
Not Currently Available for Direct Purchase