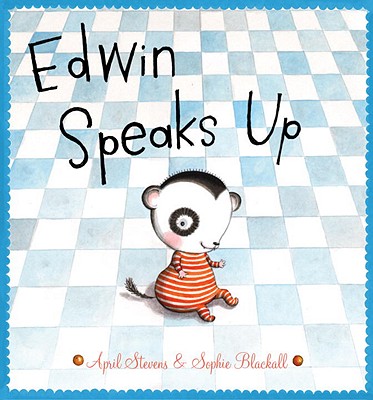 Here's a book that will get the whole family laughing, illustrated by the Caldecott Medal winner Sophie Blackall. When a large family of ferrets and their precocious baby take a chaotic trip to the supermarket, mom can't keep track of the groceries, the shopping cart . . . or even the kids Baby Edwin tries to help, but everyone thinks he's just babbling. Little do they know that he really has all the answers.Full of fun-to-say nonsense words this is a perfect storytime book and a great read-aloud.

APRIL STEVENS is the author of Waking Up Wendell, which received two starred reviews and was a 2008 Bank Street Best Book of the Year. Kirkus Reviews called it "as absolutely charming as a sunny morning can be." She also wrote an adult novel, Angel, Angel. SOPHIE BLACKALL received the Caldecott Medal forFinding Winnieby Lindsay Mattick. She is the illustrator ofA Fine Dessertby Emily Jenkins, aNew York TimesBest Illustrated Book; The Mighty Lalouche by Matthew Olshan, a School Library Journal Best Book of the Year; andRuby's Wishby Shirin Yim Bridges, an Ezra Jack Keats New Illustrator Award winner. She has also illustrated the Mr. and Mrs. Bunny series by Polly Horvath and the bestselling Ivy and Bean series by Annie Barrows.A native of Australia, she lives in Brooklyn, New York. Visit her at SophieBlackall.com"

Praise For Edwin Speaks Up…

Starred review, Booklist, May 15, 2011:
"Stevens’ spot-on story about every mother’s nightmare, the group grocery-store shop, is matched by Blackall’s delicious art...This is a book that’s clever in every sense of the word: skillful, original, and witty."