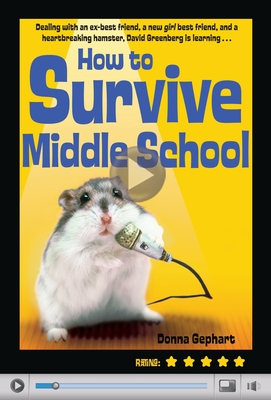 Fans of James Patterson's Middle School series will root for David as he goes from feeling as insignificant as a hamster to becoming an Internet superstar. Perfect for back to school--no matter what that looks like!

Eleven-year-old David Greenberg dreams of becoming a YouTube sensation and spends all of his time making hilarious Top 6½ Lists and Talk Time videos. But before he can get famous, he has to figure out a way to deal with:

6. Middle school (much scarier than it sounds!)
5. His best friend gone girl-crazy
4. A runaway mom who has no phone!
3. The threat of a swirlie on his birthday
2. A terrifying cousin
1. His # 1 fan, Bubbe (his Jewish grandmother)
1/2. Did we mention Hammy, the hamster who’s determined to break David’s heart?

But when David’s new best friend, Sophie, starts sending out the links to everyone she knows and her friends tell their friends, thousands of people start viewing his videos.

With short chapters and broad humor, this one is for "Wimpy Kid" aficionados."--School Library Journal, starred.

"A deft balance of clever humor and poignant drama makes for an engaging and thoroughly enjoyable coming-of-age story, one to which many young readers, particularly boys, will find themselves relating . . . excellent cast of supporting characters . . . there are enough laughs, tears and additional contributions from a camera-loving hamster here to make this one appeal to Diary of a Wimpy Kid fans."--The Bulletin of the Center for Children's Books

"Gephart crafts for her likable protagonist an engaging, feel-good transition into adolescence that’s well stocked with tears and laughter."--Booklist

"This funny, tender novel . . . is relatable and compulsively readable."--Publisher's Weekly

Donna Gephart is the author of As if Being 12 3/4 Isn’t Bad Enough, My Mother Is Running for President, Olivia Bean, Trivia Queen, Death by Toilet Paper, and Lily and Dunkin. She lives in Jupiter, Florida, with her family.
Loading...
or support indie stores by buying on