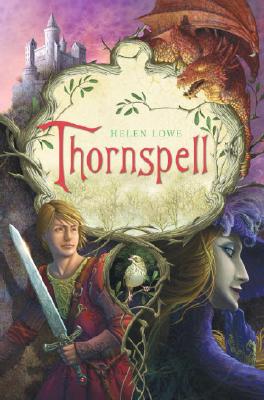 Helen Lowe reimagines the Sleeping Beauty story from the point of view of the prince who is destined to wake the enchanted princess in this lush, romantic fantasy-adventure.

Prince Sigismund has grown up hearing fantastical stories about enchantments and faie spells, basilisks and dragons, knights-errant and heroic quests. He'd love for them to be true—he's been sheltered in a country castle for most of his life and longs for adventure—but they are just stories. Or are they?

From the day that a mysterious lady in a fine carriage speaks to him through the castle gates, Sigismund's world starts to shift. He begins to dream of a girl wrapped, trapped, in thorns. He dreams of a palace, utterly still, waiting. He dreams of a man in red armor, riding a red horse—and then suddenly that man arrives at the castle!

Sigismund is about to learn that sometimes dreams are true, that the world is both more magical and more dangerous than he imagined, and that the heroic quest he imagined for himself as a boy . . . begins now.

"A quiet hero anchors this nicely crafted blend of fairy tale and dreamscape. . . . A narrative that begins as an exploration of fairy-tale archetypes thus moves into a very human and nevertheless magical drama. Thoughtful and understated." —Kirkus Reviews

"The charming modifications hang together nicely with the traditional elements of the story, and romance readers as well as fairy-tale aficionados will delight in this deft handling of the tale." —The Bulletin of the Center for Children's Books

"This reimagining of 'Sleeping Beauty' follows the prince as he develops from a wistful little boy who longs for his stern father's approval into the worthy hero he is destined to be." —Booklist

Helen Lowe won the inaugural Robbie Burns National Poetry Award in 2003 and was the recipient of a New Zealand Society of Authors/Creative New Zealand award for emerging writer. For "Thornspell," she received the Sir Julius Vogel Award for best young adult novel. She received a second Vogel Award as best new talent in the fantasy field.

In addition to her writing life, Helen has a second-dan black belt in aikido and represented her university in the sport of fencing. She lives in a ninety-year-old house with a woodland garden in Christchurch, New Zealand, which she shares with her partner, Andrew, and two cats.
Loading...
or
Not Currently Available for Direct Purchase