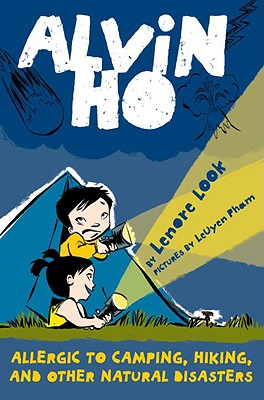 Here's the second book in the beloved and hilarious Alvin Ho chapter book series, which has been compared to Diary of a Wimpy Kid and is perfect for both beginning and reluctant readers.

Praise For Allergic to Camping, Hiking, and Other Natural Disasters…

Starred Review, The Horn Book Magazine, September/October 2009:
"Readers can only hope that Alvin continues to describe in such wonderful detail his many allergic reactions."

Kirkus Reviews, May 19, 2009
"While Look certainly embellishes at times for comedic effect, she has created in Alvin a character that is as real as he is irascible, and the tender relationships among the members of the Ho family provide a sturdy backbone for all the silliness. Pham’s simple but vibrant line drawings leap off the page. Another triumph for Alvin Ho."

Lenore Look is the author of the popular Alvin Ho series, as well as the Ruby Lu series. She has also written several acclaimed picture books, including "Henry's First-Moon Birthday, Uncle Peter's Amazing Chinese Wedding, " and "Brush of the Gods." Lenore lives in Hoboken, New Jersey.

LeUyen Pham is the illustrator of the Alvin Ho series, as well as "The Best Birthday Party Ever" by Jennifer LaRue Huget; "Grace for President "by Kelly DiPucchio, a "New York Times" bestseller; and the Freckleface Strawberry series by Julianne Moore. She is the author and illustrator of the picture books "Big Sister, Little Sister "and "All the Things I Love About You." LeUyen lives in San Francisco. Learn more at leuyenpham.com.
Loading...
or
Not Currently Available for Direct Purchase