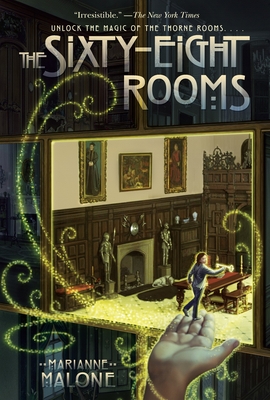 “When Jack and Ruthie find themselves heading to the Thorne Miniature Rooms in the Children's Galleries of the Chicago Art Institute for a class field trip, little do they know they will discover the key to taking them back in time and opening the doors to rooms that hold the secrets of history. This is a story that will sweep young readers into the magic of an exciting art and history mystery adventure.”
— Carol Hicks, Bookshelf At Hooligan Rocks, Truckee, CA
View the List

The perfect next step for kids who love the Magic Tree House series, time travel, mystery, and adventure!

Almost everybody who has grown up in Chicago knows about the Thorne Rooms. Housed in the deep inside the Chicago Art Institute, they are a collection of 68 exquisitely crafted miniature rooms. Each room is set in a different historic period, and every detail is perfect. Some might even say, the rooms are magic.

But what if on a field trip, you discovered a key that allowed you to shrink so that you could sneak inside and explore the rooms' secrets? What if you discovered that others had done so before you? . . . And that someone had left something important behind?

Eleven-year-olds Jack and Ruthie are about to find out!

"Marianne Malone has tapped into a fantasy that is . . . completely universal."—Chicago Tribune

MARIANNE MALONE is the mother of three grown children, a former art teacher, and the cofounder of the Campus School Middle School for Girls in Urbana, Illinois. She and her husband divide their time between Urbana and Washington, DC. This is her first novel. You can visit her Web site at MarianneMalone.com.
or support indie stores by buying on