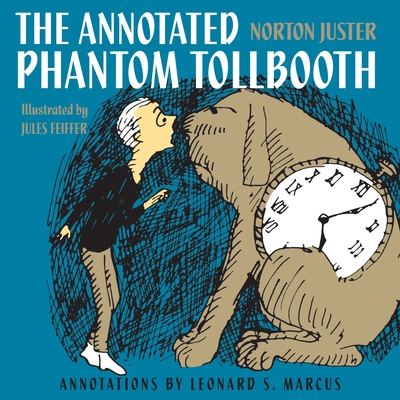 The Phantom Tollbooth is a universally beloved childhood classic. In the 50 years since its original publication, millions of children have breathlessly followed Milo's adventures in the Lands Beyond.

Now Leonard Marcus, a nationally acclaimed writer on children's literature, has created a richly annotated edition of this perennial favorite. Marcus's expansive annotations include interviews with the author and illustrator, illuminating excerpts from Juster's notes and drafts, cultural and literary commentary, and Marcus's own insights on the book. The Annotated Phantom Tollbooth also includes an introduction that shares the fascinating background on the book's publication—Juster and Feiffer met as young neighbors in Brooklyn, New York, and thus began a fortuitious collaboration on a project that would become an instant classic—as well as its enduring place in the world of children's literature.

The Annotated Phantom Tollbooth is the perfect way to honor a classic and will be welcomed by young readers and fans of all ages.

NORTON JUSTER is an architect and the author of other highly acclaimed children's books, including The Dot and the Line, which was made into an Academy Award-winning film,  The Hello, Goodbye Window, illustrated by Chris Raschka, which received the Caldecott Medal, and The Odious Ogre, also illustrated by Jules Feiffer.  Mr. Juster lives with his wife in Western Massachusetts.

JULES FEIFFER is the author and illustrator of two novels for young readers, as well as several acclaimed picture books including Bark, George, and Meanwhile. . . . He has won numerous prizes for his cartoons, plays, and screenplays. Mr. Feiffer lives in New York City.
Loading...
or
Not Currently Available for Direct Purchase