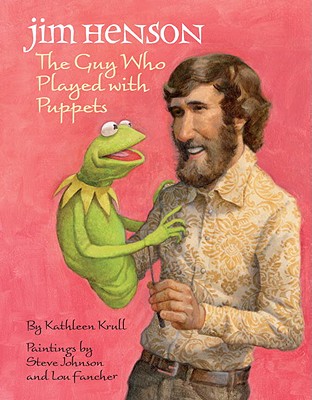 The Guy Who Played with Puppets

Sesame Street and The Muppet Show introduced Jim Henson's Muppets to the world, making Kermit the Frog, Oscar the Grouch, and Big Bird household names. But even as a child in rural Mississippi, listening to the radio and putting on comedy shows for his family, Jim recognized the power of laughter to bring people together. On Sesame Street, Jim's Muppets transformed children's television by making learning fun for kids everywhere. A visionary, Jim always believed that puppets could reach a wider audience. In 1976, he proved it, drawing millions of family viewers to The Muppet Show. With his feature film The Dark Crystal and his Star Wars characters including Yoda Jim continued to push the boundaries of what was possible in puppetry until his death in 1990 at the age of 53.
Kathleen Krull, recipient of the Children's Book Guild 2011 Non-fiction Award and many other accolades, once again does what she does so well illuminating the life of an important figure in history, art, and culture with her informative but approachable writing style.

KATHLEEN KRULL winner of the 2010 Eureka! Children's Nonfiction Award Silver Honor is perhaps best known as a writer of richly entertaining biographies for children, such as FDR and The Boy Who Invented TV. Her Lives of series, which includes Lives of Extraordinary Women: Rulers, Rebels (and What the Neighbors Thought), has been hugely popular with readers of all ages. Kathleen lives with her husband, children's illustrator Paul Brewer, in San Diego, California. STEVE JOHNSON and LOU FANCHER, a husband-and-wife team, are the illustrators of The Boy on Fairfield Street by Kathleen Krull, My Many Colored Days by Dr. Seuss, and New York's Bravest by Mary Pope Osborne. I Walk At Night was a New York Times Best Illustrated Book. Visit www.johnsonandfancher.com."
or
Not Currently Available for Direct Purchase
Copyright © 2020 American Booksellers Association