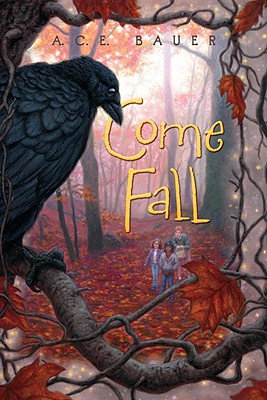 Lu Zimmer's best friend moved away last summer. Salman Page is the new kid in school. Blos Pease takes everything literally. Three kids who are on the fringe of the middle school social order find each other and warily begin to bond, but suddenly things start going wrong. Salman becomes the object of the school bully's torment, and Lu's pregnant mother has some unexpected complications. Is something conspiring against them?

In fact, through no fault of their own, Salman and Lu have become pawns in a game of jealous one-upmanship between Oberon and Titania, the king and queen of Faery, with the mischievous Puck trying to keep the peace.

Taken from Titania's mention of a foundling in Shakespeare's A Midsummer Night's Dream, A. C. E. Bauer spins an original tale about magical intervention in the least magical of settings: a public middle school.

A. C. E. Bauer has been telling stories ever since she could talk (some were real whoppers). After learning how to write them down, she began handing them out as gifts to her family. Ms. Bauer took a break from writing for a while when she was a lawyer helping poor people, writing legal briefs and telling stories about her clients. She has returned to fiction and now writes for children of all ages. Born and raised in Montreal, she spends most of the year in Cheshire, Connecticut, and much of the summer on a lake in Quebec. She lives with her husband, two children, and their dog, Speedy.
or
Not Currently Available for Direct Purchase
Copyright © 2020 American Booksellers Association