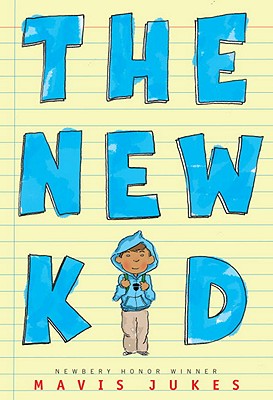 Newbery Honor Award—winning author Mavis Jukes is back with a lovable new character named Carson. His father moves him to a new town in Northern California, where he'll be the new kid in class—friendless and alone, except for his beloved stuffed moose (named Moose, of course). As Carson settles into his new surroundings, a series of delightful mishaps start to occur: the class pet, a rat named Mr. Nibblenose, gets lost to surprising results; the culprit of a mysterious lunch theft might actually be something that's not human at all; and when his beloved Moose goes missing, Carson makes his first new non-stuffed animal friend. Told with childlike charm and wit, The New Kid is perfect for newly independent readers.

MAVIS JUKES is the award-winning author of several books for children and teenagers, including the picture books No One is Going to Nashville, Blackberries in the Dark, I'll See You in My Dreams, You're A Bear, and Like Jake and Me, which earned a Newbery Honor Award. Other titles include several nonfiction books in a series for adolescents, including Be Healthy! It's A Girl Thing: Food, Fitness and Feeling Great, cowritten by Lilian Cheung, DSc.

Mavis taught school for several years, then became a lawyer before writing her first book for children. She recently returned to the classroom full-time, currently teaching computer class to 900 enthusiastic students in three different public schools a week. It is from this job that she has drawn inspiration for the ideas and antics featured in The New Kid.

Mavis lives with her husband, the artist Robert Hudson, in Sonoma County, California. They share their small ranch with four cats, a dog, numerous hawks, owls, raccoons, opossoms, skunks, and other mysterious critters whose eyes twinkle in the dark. Mavis and Bob are the parents of four children, all artists.
or
Not Currently Available for Direct Purchase
Copyright © 2020 American Booksellers Association