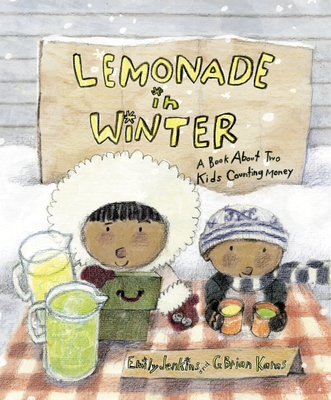 A lemonade stand in winter? Yes, that's exactly what Pauline and John-John intend to have, selling lemonade and limeade--and also lemon-limeade. With a catchy refrain (Lemon lemon LIME, Lemon LIMEADE! Lemon lemon LIME, Lemon LEMONADE!), plus simple math concepts throughout, here is a read-aloud that's great for storytime and classroom use, and is sure to be a hit among the legions of Jenkins and Karas fans.

"A beautifully restrained tribute to trust and tenderness shared by siblings; an entrepreneurship how-to that celebrates the thrill of the marketplace without shying away from its cold realities; and a parable about persistence." —Publishers Weekly, Starred

EMILY JENKINS is the author of the Toys Trilogy, which includes Toys Go Out, Toy Dance Party, and, most recently, Toys Come Home, which Booklist, in a starred review, called "a timeless story of adventure and friendship to treasure aloud or independently." She is the author of numerous other books for children, including Sugar Would Not Eat It and Five Creatures.

G. BRIAN KARAS is the prolific, versatile, and award-winning illustrator of many books for children, including, most recently, Neville and Clever Jack Takes the Cake, which received four starred reviews. His other books include How Many Seeds in a Pumpkin?; Are You Going to Be Good?, a New York Times Best Illustrated Book; Home on the Bayou, which was the recipient of the Boston Globe-Horn Book Award; and Muncha! Muncha! Muncha!

Praise For Lemonade in Winter: A Book About Two Kids Counting Money…

Starred Review, School Library Journal, August 1, 2012:
“This quirky tale is a boon for young entrepreneurs, who will enjoy looking at the humorous details in the pictures as much as working out the math after each sale.”