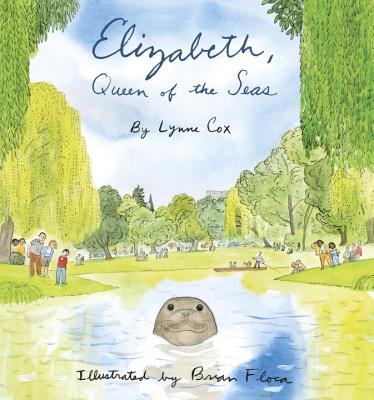 Elizabeth, Queen of the Seas

World-renowned swimmer and bestselling author Lynne Cox and Caldecott Medal-winning illustrator Brian Floca team up to bring us this inspiring story of an elephant seal who knew exactly where she belonged.

Here is the incredible story of Elizabeth, a real-life elephant seal who made her home in the Avon River in the city of Christchurch, New Zealand. When Elizabeth decides to stretch out across a two-lane road, the citizens worry she might get hurt or cause traffic accidents, so a group of volunteers tows her out to sea. But Elizabeth swims all the way back to Christchurch. The volunteers catch her again and again—each time towing her farther, even hundreds of miles away—but, still, Elizabeth finds her way back home.

Includes back matter with information about elephant seals.

Praise For Elizabeth, Queen of the Seas…

Publishers Weekly starred review, February 24, 2014
“The newly minted Caldecott winner may be best known for his more encyclopedic works, but he proves that whether the subject is trains or stubborn seals, he’s a master storyteller."

Publishers Weekly starred review, February 24, 2014
“Based on a true story—there is a photo of the real Elizabeth in the illuminating afterword—this is superior addition to shelves featuring wild animal personalities.“

The Bulletin starred review, July/August 2014:
"The book’s sunny temperament, Southern setting, and focus on an animal who knows where she wants to be despite human intervention make it a neat inverted complement to Carnesi’s compelling and fact-based Little Dog Lost."

LYNNE COX is a legendary long-distance, open-water swimmer; the author of several books for adults, including South with the Sun, Grayson (a New York Times bestseller), and Swimming to Antarctica (a New York Times bestseller); and a contributor to the New Yorker. She has set records for swimming all around the world, and in 2000 she was inducted into the International Swimming Hall of Fame. Lynne first learned of Elizabeth's story when she traveled to New Zealand to swim across three lakes near Mount Cook. This is her first children's book.