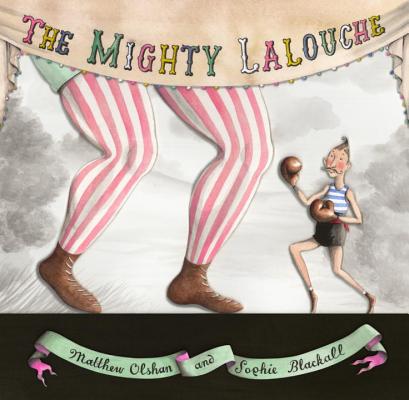 Caldecott Medal-winning illustrator Sophie Blackall brings to life this marvelous story, which is full of humor and heart. In Paris, France, there lived a humble postman named Lalouche. He was small, but his hands were nimble, his legs were fast, and his arms were strong. When his job was replaced by an electric car, he turned to boxing to support himself and his pet finch, Genevieve. But—"You? A boxer?" the fighters asked. "I could sneeze and knock you down!" Still, Lalouche refused to give up. And perhaps small Lalouche was just nimble . . . just fast . . . and just strong enough to beat his fierce competitors.

Includes an author's note with historical information about French boxing and electric cars.

Praise For The Mighty Lalouche…

Starred Review, Publishers Weekly, March 11, 2013:
“Lalouche is an endearingly oddball hero, and Blackall takes her always-exquisite ink-and-watercolor artwork to another level, creating three-dimensional cut-out scenes that have the intensity of silent film and the magic of an exquisitely crafted toy theater. C’est formidable!”

Starred Review, School Library Journal, April 2013:
“The illustrations are outstanding–Blackall has outdone herself… The text and pictures work expertly together, moving the story forward in clever and funny ways.”

MATTHEW OLSHAN is the author of Finn: A Novel, a modern telling of Mark Twain's The Adventures of Huckleberry Finn, with girls as protagonists rather than boys. His latest novel The Flown Sky, is a fantasy in the tradition of C.S. Lewis's Narnia Chronicles. Olshan lives in Baltimore, but also has a little farm in southcentral Pennsylvania, called Pencil Creek. Visit him at MatthewOlshan.com.

SOPHIE BLACKALL received the Caldecott Medal for Finding Winnie by Lindsay Mattick. She is the illustrator of A Fine Dessert by Emily Jenkins, a New York Times Best Illustrated Book; Edwin Speaks Up by April Stevens, a Bank Street College of Education Best Book of the Year; and Ruby's Wish by Shirin Yim Bridges, an Ezra Jack Keats New Illustrator Award winner. She has also illustrated the Mr. and Mrs. Bunny series by Polly Horvath and the bestselling Ivy and Bean series by Annie Barrows. The Mighty Lalouche was written specifically for Sophie Blackall, after the author discovered that she collected old pictures of boxers, especially "extremely skinny ones with big billowing boxing trunks." A native of Australia, she lives in Brooklyn, New York. Visit her at SophieBlackall.com.
Loading...
or
Not Currently Available for Direct Purchase