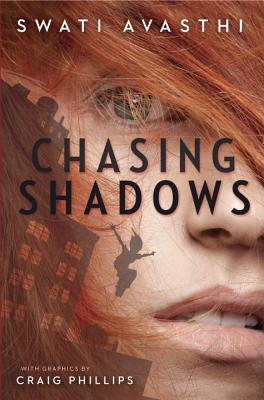 Corey, Holly, and Savitri are closer than family until a random act of violence shatters their world. A gunman shoots at their car, leaving Corey dead, Holly in a coma, and Savitri the sole witness to the crime.

When Holly wakes up, she is changed—determined to hunt down Corey’s killer, whatever the cost. Savitri fears that Holly is running wild, losing her grip on reality. Friends should stand by each other in times of crisis. But can you hold on too tight? Too long?

Swati Avasthi delivers a riveting novel that will appeal to fans of Laini Taylor and Laurie Halse Anderson.

“[A] visceral story of love, grief, and madness that is both action-packed and psychologically acute.” —The Horn Book

Starred Review, School Library Journal, November 2013:
“Fans of Cecil Castellucci’s Year of the Beasts will especially appreciate this book’s themes and its hybrid format that alternates chapters…in both compelling text and adept black-and-white graphics–graphics that ultimately deliver a sad and powerful twist.”

SWATI AVASTHI is the author of the highly acclaimed novel Split, winner of the IRA Book Award and the Cybils Award. Ms. Avasthi received her MFA from the University of Minnesota and currently teaches in Hamline University’s MFA program in Writing for Children and Young Adults. She lives in Minneapolis with her husband and two children. Visit her at swatiavasthi.com.

CRAIG PHILLIPS is an award-winning illustrator whose work has appeared on book jackets, in publications like Rolling Stone, and on tour posters for bands, including the Foo Fighters and the Red Hot Chili Peppers. He lives in New Zealand with his family.