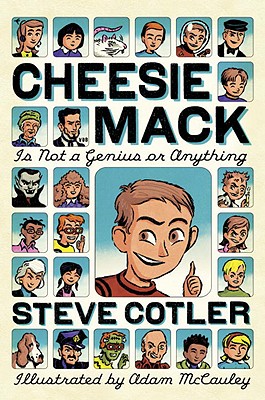 Cheesie Mack Is Not a Genius or Anything

Ronald "Cheesie" Mack is not a genius or anything, but he remembers everything that happened before, during, and after fifth-grade graduation, and he's written it all down in his own unique and hilarious way—with lots of lists, drawings, and splenderful (that's splendid plus wonderful!) made-up words.

Cheesie—with a little help from Steve Cotler—writes about family, friendship, and tough choices in an unforgettable voice that will have kids laughing out loud. Readers of Diary of a Wimpy Kid will love both the clever humor and the black-and-white illustrations throughout.

Praise For Cheesie Mack Is Not a Genius or Anything…

Kirkus Reviews:
"Readers will be happy to learn that Cotler's debut is the first in a new series. Cheesie chattily narrates his own story; his voice rings true, and the other characters are a gently quirky, appealing lot."

Publishers Weekly:
"Fifth-grader Ronald 'Cheesie' Mack's problems (like how to outsmart his evil older sister June, aka 'Goon') may be ordinary, but in the hands of first-time author Cotler they're plenty entertaining."

Booklist:
"Cheesie and his book are basic, good old-fashioned fun."

The Bulletin of the Center for Children's Books:
"A lighthearted and fast-moving read for kids looking for middle-school shenanigans."

The Horn Book Magazine:
"The pleasures are in meeting a new friend--and in the promise of a sequel to this debut novel."

STEVE COTLER is a retired Little League catcher who's also been a shoe salesman, telecom scientist, singer-songwriter, Apollo 1 computer programmer, Hollywood screenwriter, Harvard Business School MBA, investment banker, and door-to-door egg man. He lives with his wife and writes in Sonoma County in Northern California's wine country. He thinks he is and always will be eleven years old.