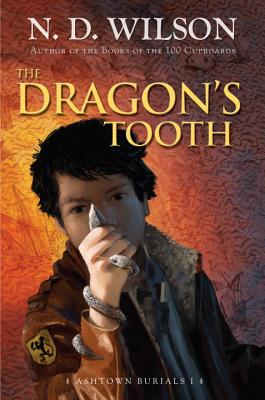 N. D. Wilson, author of Leepike Ridge and 100 Cupboards, returns with an action-packed adventure that will captivate fans of both Percy Jackson and Indiana Jones with lost civilizations, ancient secrets, and buried treasure.

For two years, Cyrus and Antigone Smith have run a sagging roadside motel with their older brother, Daniel. Nothing ever seems to happen. Then a strange old man with bone tattoos arrives, demanding a specific room.

Less than 24 hours later, the old man is dead. The motel has burned, and Daniel is missing. And Cyrus and Antigone are kneeling in a crowded hall, swearing an oath to an order of explorers who have long served as caretakers of the world's secrets, keepers of powerful relics from lost civilizations, and jailers to unkillable criminals who have terrorized the world for millennia.

Starred Review, Publishers Weekly, August 8, 2011:
"Wilson (the 100 Cupboards books) launches the Ashtown Burials series with this wildly imaginative and action-packed thrill ride. Cyrus and Antigone Smith . . . must prove their worth to [a] society of adventurers and explorers whose past members have included the likes of Amelia Earhart. Additionally, Cyrus and Antigone battle traitors and subterranean creatures while struggling to keep an ancient artifact away from an immortal madman. Wilson balances these hyperbolic plot elements with measured prose and smart dialogue, while combining pulp sensibilities, cinematic pacing, and fully developed characters readers will gladly follow down the rabbit hole."

Starred Review, Booklist, October 15, 2011:
"Cyrus and Antigone Smith have been living with their brother, Dan, since the mysterious circumstances that caused their father’s death and their mother’s coma. Then Billy Bones appears out of nowhere with a ring of keys and a dragon’s tooth. Within moments of passing them to Cyrus, Billy is killed and Dan is kidnapped by the elusive Dr. Phoenix. The only possibility of rescuing their brother seems to reside in Ashtown with the Order of Brendan. This fast-paced fantasy quickly draws readers in to its alternate reality, where transmortal creatures cannot be defeated with ordinary weapons, and Dr. Phoenix’s experiments on Dan and others are reminiscent of history’s worst realities. Yet, on the positive side, there is the love the Smith family holds for one another, love that requires trust and self-sacrifice. Allusions to mythology and complex character development—not only of several young protagonists but also of Phoenix and the shifty cook, Sterling—make Wilson’s first in a proposed series a gem. In an embattled world, where evil seems insurmountable, a glimmer of hope arises from a tooth."

Starred Review, School Library Journal, November 1, 2011:
"The Order of Brendan is an underground collective of sages, historians, and explorers who've been guarding the world's secrets for millennia. Cyrus and Antigone are plunged headlong into an exciting and dangerous world and pursued by a deadly advisory who will do anything to possess their strange inheritance.This volume marks the birth of an extraordinary new series. Populated with well-crafted characters, peppered with mythological references, and brought to vivid life through Wilson's masterful storytelling, this book is sure to appeal to the adventurous spirit in all who delve into its pages."

The Bulleting of the Center for Children's Books, December 2011:

"A wild adventure that features swarms of deadly, carnivorous spiders, one gigantic snapping turtle, animal/human hybrids, and a double-timing cook—not to mention the occasional cameos by Amelia Earhart and Rasputin. The mythology behind the Order is neatly woven into the action-packed plot, offering a brief reprieve from chases and hunts without slowing the pace. Even at a hefty 400-plus pages, this exhilarating story reads like a breeze, and fans of adventure will have a hard time putting it down."

"A wild fantasy romp through a creatively imagined alternative world. For readers who've reread all of Harry Potter multiple times, this will be just what the doctor ordered."

N. D. WILSON is the bestselling author of the 100 Cupboards series and Leepike Ridge. Once, in the fourth grade, he split his buddy’s arrow while shooting at a mattress from twenty yards. Now he writes at the top of a tall, skinny house, where he lives with a blue-eyed girl he stole from the ocean, their five young explorers, two tortoises, and one snake.