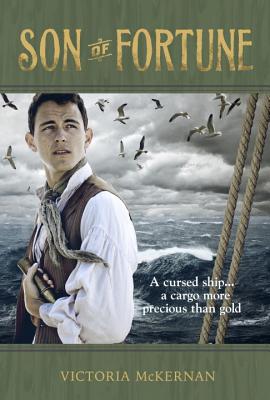 Aiden Lynch is a survivor only 16 years old, he's seen himself through near-starvation on the Kansas prairie, a brutal journey on the Oregon trail, and backbreaking work in a lumber camp. Now he's reached the glittering city of San Francisco, and though his future is uncertain, promise lies ahead. Luck seems to favor him as he manages to stay one step ahead of trouble, even in the city's notoriously dangerous Barbary Coast. And it is pure fortune that leads him to a wealthy family, and then the high-stakes poker game in which he wins a ship fully outfitted and ready for trade. The trade he has inherited: importing guano, a highly potent fertilizer, from island mines in Peru.
But what he finds in Peru is a savage business conditions at the mines are unthinkable, the workers forced into servitude. When Aiden becomes involved with a miner who claims to be a kidnapped Chinese nobleman, all his loyalties are called into question, and he's plunged into a dangerous game.

VICTORIA MCKERNAN is the acclaimed author of "The Devil's Paintbox" and "Shackleton's Stowaway, " a historical novel for young adults about the 18-year-old stowaway on Ernest Shackleton's 1914 expedition to the South Pole. She has also written four novels for adults. She lives in Washington, D.C., with a dog, two cats, and one boa constrictor.

Praise For Son of Fortune…

Starred Review, Kirkus Reviews, September 15, 2013:"Aiden’s dilemmas are rooted in the time and yet move beyond it, creating a glimpse into the past that is relevant today.”